Bourke Sprague is a new drainage contractor bursting onto the scene with success in Kentucky. 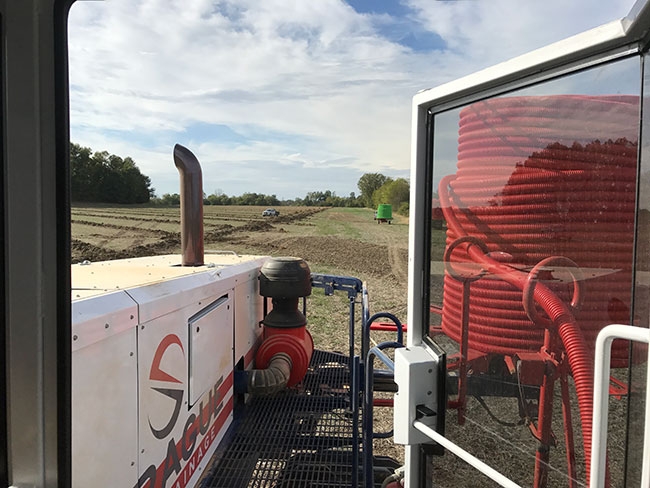 No official background in drainage or excavating stopped the now 37-year-old Bourke Sprague from building his company, Sprague Excavating LLC, based in Union County, KY.

After graduating from the University of Mississippi in 2002 with a degree in marketing, Sprague came back home to try farming with his dad, who, since 1984, had rented out the farm. After farming for two years, with the economy on the downswing, the family decided to once again rent out the 1500-acre farm in 2004.

Along with his brother and father, Sprague helped build a 40-acre motocross facility on some strip mine land they owned. Building this track was the first time he had ever ran a bulldozer. Sprague logged nearly 4,000 hours of dozer time building, grooming, rebuilding, and preparing the track over the six years in operation.

After the project, Sprague started Sprague Excavating LLC in 2005.

A challenging start
Launching a new business is a challenge and hard work in its own right, but there’s something to be said for starting a new excavating and drainage business, where companies have more than likely been operating in some communities for decades.

“It’s very hard when someone like me hasn’t been in the business at all to come into [the] local community and gain their confidence that I could do the jobs correctly,” Sprague says. “It had been a struggle for two or three years to pick up work. However, with each job I completed, I started to attract new customers.”

At this point, Sprague had accumulated an old excavator and couple of late model dozers and began to market himself to other farmers in the area for custom work. For the next two years or so work was slow, but Sprague stayed persistent.

Things started to change in 2008 when he started doing excavating work for a local drainage contractor and farmer who had been in business for over 40 years. Sprague says this farmer was instrumental in helping him grow his knowledge of the tile drainage business.

In 2010, the contractor sold his tile machine and retired. Sprague saw opportunity there. “I felt it was time to be a full-service business and offer both tiling and dozer services,” Sprague says. “This way, I could install tile and then do the dozer work. Up until this point I was doing dozer work for a couple of tile contractors and my work depended on them installing tile in order for me to build levees. I knew in order for me to grow my company I had to invest in a tile plow.”

In the beginning, Sprague surrounded himself with more experienced people in the drainage field in hopes that some of their knowledge would rub off. Sprague credits the relationships he built and the experience he had with the local NRCS at the start of his career.

“The NRCS guys were really hard on me when checking my work. If I was a tenth of an inch low on the height of a levee they would make me drive across the field and fix it. Looking back, I’m glad they held me to those high standards as it taught me to do the job correctly the first time.” Sprague says.

“I went headfirst into the drainage business. I definitely know all about on the job training and with each job I completed I became more and more comfortable with the work,” he says. “I’ve been eating, breathing and sleeping tiling since I bought that first plow. It’s something I’ve been able to do naturally and completing a quality job from conception to completion gives me great satisfaction.”

When first getting established, Sprague wasn’t afraid to ask for help, getting assistance with designing drainage projects and spending many hours learning how to use design software. He installed his first tiling project in March 2010, with a 9400 John Deere tractor and a pull-type plow. Sprague used this equipment to mainly complete soil erosion projects and small pattern tile jobs.

After a couple of years, Sprague bought a D8-sized dozer with a rear mount plow – now he had tracks and the ability to install large mains. After a year, he was able to afford his first self-propelled Wolfe 400 tile plow in 2013. This machine really helped open opportunities for Sprague. He purchased a two-year-old Wolfe 540 in 2016, and now operates a brand new Wolfe 600 parallel link plow.

Good team, good contractor
Sprague currently operates with a crew of seven men, four of which are the tile crew, working on the fields day-to-day. Despite a decent-size crew, the long days and even longer nights have Sprague thinking of taking a step away from operating the plow. The environment and weather also take a toll since the area Sprague operates in isn’t prone to freezing and the crew runs through winter. Other team members are starting to transition into different positions.

“I probably do about 95 percent of the plowing right now. I really feel [that] farmers like to see the owner running that machine,” Sprague says. However, if he has to look at new jobs or survey a field, Sprague calls on one of his crew, David Wright, to run the plow.

“David has been with me since the beginning and I credit our success to him as much as [myself]. Hopefully [the business] will continue to grow and I will have a solid foundation in place for a second crew.”

After plowing all week, Sprague spends the weekends looking at new potential jobs, doing administrative work, research or surveying. He will sometimes spend upwards of 80 hours per week working, which wouldn’t be possible without the support from his wife and two daughters.

“[My wife Heather] has been so supportive of me, by my side the entire time,” Sprague says. “It takes a special family that understands the work it takes in the agriculture and agricultural drainage businesses.”

In addition to the long days, a constant issue is logistics. With so many pieces of equipment and so many different jobs to do, it can be challenging to maximize efficiency. That, along with being self-employed and operating a company, Sprague needs to invest a lot of time and effort in order to stay on top of things.

He highlights the importance of finding and harboring good employees.

“Surround yourself with people that are going to do what they say and work with you,” Sprague says. “Those people are your ‘pit crew’ and if you don’t have a good one, then you won’t win the race. You’ve got to have people you can depend on.”

Sprague differentiates himself from his competition by using his knowledge of different soil profiles to provide the farmer with information about their land they may not have known.

“When presenting a drainage plan to a customer, I want to give them as much information about their land and soil profiles as I can,” Sprague says. “Looking at their soil information allows me to design the field with the correct tile spacing and depth.”

Sprague presents this information in a very detailed manner, compiled in a binder for them to keep. He utilizes large format printers to print large tile maps in the planning phase so the designs are easier to see.

“I put a lot of effort into this part of the process and I believe it pays, because the farmer can see that you have done your due diligence. After a job is completed I give the customers a completed tile map in small and large format for their records.”

Networking opportunities
Continuing education and creating a network of other drainage contractors has helped Sprague stay ahead in the industry, especially since LICA doesn’t currently hold a chapter in Kentucky. But, Sprague says face-to-face networking isn’t the only option any more, Facebook is great tool to learn and hear about what other contractors are doing, and it also appears to works from a marketing standpoint.

“It’s been a neat tool for brand awareness and recognition. It might not get you a job per se (it’s hard to tell) but I guarantee people see and know who you are and that’s a step in the right direction.”

“I’m all about consuming as much information as I can,” Sprague says. “It’s really nice to be able to talk to other contractors because you can’t really talk to them in your local area – since they’re competitors.

Sprague is now a part of a networking group of sorts with three other contractors from three different states: South Dakota, Wisconsin and Iowa. Thesecontractors wanted to bring together likeminded people with similar business goals.

“Our first meeting was last year, we sat down with all our numbers and critiqued each other’s operations, offering suggestions to help each other out.”

Looking to the future, Sprague is studying water quality control and learning about bioreactors, even though there aren’t a lot of regulations in the area. Ultimately, Sprague says the more information he can give to the producers, the better that reflects on him as a business owner and drainage contractor.  He’s also become very good at designing tile systems with pump stations.

“I love to take on the most challenging jobs that I can – the harder the job the more fun and satisfying it is for me to complete,” Sprague says.  “One of the biggest rewards for me is to take a seemingly impossible job and transform it into a highly producing field. It doesn’t get any better than that.”