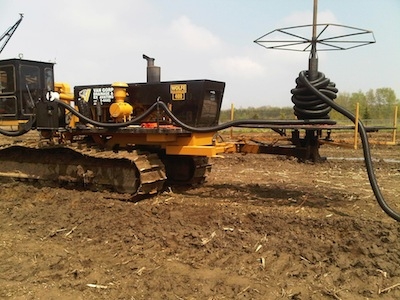 The on-board tile reel manufactured by Holdwick Tiling Company has a hydraulic tilt for lifting and loading. From snow buckets to manure buckets, we can fix it. Bring it in or we can come to you.

“From snow buckets to manure buckets, we can fix it. Bring it in or we can come to you. We’ve made everything from hoof trimmer cow cages to handicap elevators in homes. Bring your own design, or let us design and build.”

These words, found in Holdwick Tiling Company (HTC)’s advertising, sum up more than 15 years of creativity and hard work in the company’s fabrication service division – a section of the business that was born in 1998 and now forms its core.

The story of the Harbor Beach, MI, company is one of innovation, opportunity and unexpected direction. In 1998, they had the idea to fabricate their own on-board tile reel to add onto their new Bron machine. “We built our own because our business was growing and we were trying to do more with less,” says Kevin Holdwick, who operates the company with his father Bill and brothers Eric, Greg and Keith.

“Installing a reel allowed us to do tiling with one less man because an onboard reel frees up a man to do other tasks,” he explains. “Dad was approaching retirement and we weren’t sure what that would mean for us, and building it ourselves only seemed natural with the fabrication experience we already had. Never in a million years did I think we would stop plowing tile and only build tile reels and other things.” The Holdwicks sold their tile plow and completely left drainage installation in 2007.

From the start, there was good demand for HTC tile reels, as the reduced labor they provide improved the bottom line for customers. “We quickly started building them for other individual contractors – for RWF in Canada for the various Bron plows they were manufacturing,” Holdwick remembers, “and for Port Industries in Missouri.”

Over the years, HTC has built onboard reels to fit not only Bron plows, but also Interdrain, Hoes, Dynapac, Wolfe and various dozers. More than 100 reels have been built and shipped as far east as New Brunswick, as far west as South Dakota, and as far south as Tennessee.

Their on-board reel has a hydraulic tilt for easier lifting and loading of the tile. A hydraulic brake is used to control the reel speed. The swing of the reel provides working ability from straight ahead to 90 degrees on either side, depending on right or left mount. During transport, the reel collapses and swings around to the opposite side of mount.

Early history
Machine fabrication services were offered from the start, when Holdwick’s father Bill created Holdwick Tiling Company in September 1963. Over the 40-plus years that followed, the family installed farm tile drainage using an open-wheel Speicher 600 trenching machine, a rubber-tired Steiger with a Krac plow and a 350 Bron plow. “We went through the days of setting targets using a transit level, moving to grade control with a laser to finally GPS,” says Holdwick. “Clay and cement tile went by the wayside in favor of plastic tile on reels.”

From the start, Bill and his sons had natural talent with shop work – welding, milling, lathe operation and more. “It was always there in the off-season,” says Holdwick. “In the years after we built our first on-board reel, that part of the business grew.” In 2005, they started doing some grain trucking, and by 2007 they decided to stop tile drainage work altogether. The reasons included the fact that the trucking and fabricated parts of the company seemed more lucrative at the time and that both were steady (neither was weather-dependent). There was also a desire to focus on two things instead of three, because doing all three business activities would mean risking the quality the Holdwicks wanted to maintain.

All along, the four brothers’ skills and interests have well complemented one another, and they are all able to do what each likes doing best. “Dad is retired and is in Florida half of the year, but he enjoys spending time in the shop when he is home,” says Holdwick. “He will ask us if we need anything, and will always do whatever we need. Eric is company president and drives truck for us. I am vice-president and run the fabrication shop. Greg is our office manager and Keith drives truck and works in the shop, but we can all do each other’s tasks if the need ever arises.” HTC also has five additional employees, four full-time and one part-time.

Holdwick says the fact that their father built the business from nothing makes them all very proud. “I personally also have a great deal of pride in the fact that it is my name above the door now too, and my reputation is tied to the quality of workmanship I put into everything I do.”

Along with quality work, honesty is also a very important part of HTC’s reputation. “If you aren’t honest, things won’t work the way they were intended to work,” he asserts. “We always tell the truth, whether it’s saying something won’t work, or it will cost more for us to build than for [the customer] to buy pre-made.”

Owning a business never comes without challenges, and the Holdwicks have tackled several interesting situations over the years. One of the greatest fabrication challenges involved building a truck to trim the hooves of cows. It had a chute mounted on the back of it so the cow could walk inside, and then it would be tipped on its side hydraulically so the hooves could be trimmed. Holdwick says the biggest tile reel job they ever had was a Port Industries plow that required two mounted reels. “One other project that was a challenge involved building some sheet metal fenders for an old Shepard diesel orchard tractor, as the original ones where removed long ago, and the customer wanted to return the tractor to as close to original as possible,” he remembers. “This required some research on the Internet to find an old picture so we knew just what it should look like. We have also built customer deer-guards on our local ambulances.”

But, Holdwick notes, any challenge – regardless of the extent – is always worked out through lots of communication. “Many problems occur when you are trying to build something to do a specific task,” he says, “but they are all solved by talking it through.”

Future plans for HTC include adding additional products to serve drainage contractors and growing their trucking fleet. “Personally, my two sons have both shown some interest in the business, and I am hopeful they will be involved,” says Kevin.