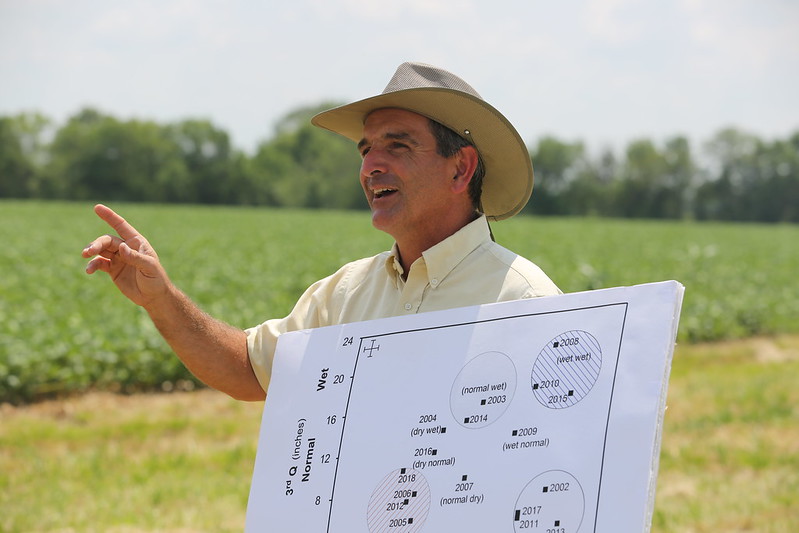 Drainage water recycling involves closed-loop drainage systems in which surface and subsurface drainage water are stored in a reservoir and then reused in supplemental irrigation. Water level control structures are spaced through water management zones based on the field’s slope, and flow is adjusted to retain or drain water based on need.

Ultimately, researchers found that the systems helped to make yield more predictable, reducing yield variability by 28 percent over 53 site-years of work. The biggest increases were seen in dry years, when corn is most vulnerable. However, soil characteristics also play a major role in yield benefits of drainage water recycling – deep soils with high water capacities are less likely to be affected by short, dry periods, thus benefitting less from irrigation.

This increases the resilience of crop systems and improves food security, says Kelly Nelson, agronomist with University of Missouri Extension.

The average yield increase of corn, compared to free drainage, was 19 bushels per acre. The study has been ongoing for several years across seven different Midwest sites. The benefits of drainage water recycling have been relatively well-known for some time – the act of saving excess water during wet seasons for later use during dry periods are known to help save on costs of water for irrigation, while also keeping nutrients from going downstream and preserving water quality – but new data also looks at the effects on crop yield. Researchers also found that yields gain most in the second half of vegetative development (nine-leaf or greater) to early grain filling (blister stage). They found no yield difference between free drainage and drainage water recycling before the V9 stage or after R2.

A combination of drainage and subirrigation also protects the environment by keeping nutrients such as nitrogen and phosphorus from entering downstream waterways, he says. That nutrient-rich water is recycled through irrigation.

To know if subirrigation using drainage water recycling is right for you, check out this tool.

Related
Maintaining private ditches: What you should know about Canada’s Fisheries Act
What we know about winter runoff
Editor’s picks: The top drainage stories for 2020
All About Bioreactors
Tags