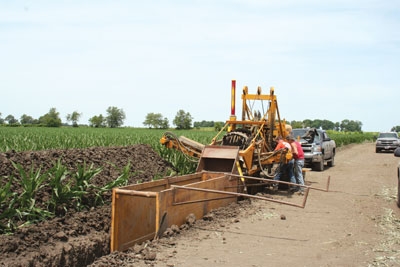 A Buckeye Super 7 Trencher is used by the Maxwell crew to install Fratco XD The agricultural drainage lines that drain water away from individual farmland tile systems are being replaced in a carefully orchestrated program that is expected to take 10 to 15 years.

The agricultural drainage lines that drain water away from individual farmland tile systems are being replaced in a carefully orchestrated program that is expected to take 10 to 15 years.  According to Tom Cummins, Montgomery County surveyor, “In a county like this, drainage is paramount because of the loamy and water-bearing soil. We have more than 200 regulated drains and somewhere between 360 to 400 miles of tile, and during the past five years this drainage infrastructure has just been falling apart.” Montgomery County, whose county seat, Crawfordsville, is 50 miles northeast of Indianapolis, has 505 square miles that is mostly farmland, mainly corn and soybeans.

In Indiana and the Midwest, recognizing the need to drain the large numbers of watersheds dates to the late 1800s and early 1900s. Montgomery County landowners realized that it would be mutually beneficial to pool their money and construct common pipelines that would carry water away from their land. Now there are a combination of open ditches and subsurface drains that landowners pay taxes to maintain. It is not uncommon to have a large-diameter 18-, 24- or 30-inch clay or concrete tile or an open ditch that would be as long as three or four miles. Cummins has found that those clay and concrete tiles have outlived their useful life, have started to break down and collapse and today are being replaced with pipe made from high-density polyethylene (HDPE).

“We started recognizing the problems that needed to be addressed,” he continued. “I spoke with all the contractors who are on my list for doing the repair work and got their feel for what was the best product out there. I had three or four who were actual tile installers, and got a lot of good information from them, what seems to be doing the best job and that led me to the HDPE pipe.”

Mostly used in this county project is perforated, corrugated, smooth inner wall HDPE pipe made with virgin resin supplied by local manufacturer Fratco, Inc. (Francesville, Indiana). Pipe diameters range from 10 to 30 inches. The bidding contractor who was awarded the project selects the brand of pipe as long as it conforms to the specifications and any additional criteria set out by the surveyor’s office. “We have never had a problem with the Fratco HDPE pipe,” stated Cummins. “It meets AASHTO and ASTM specifications.”

“Corrugated HDPE pipe is rugged because the material itself is rugged,” stated Tony Radoszewski, executive director of the Plastics Pipe Institute, Inc. (PPI), (Irving, Texas). “HDPE is abrasion resistant and will not corrode. Used since the mid-1960s for agricultural applications, the pipe is a flexible conduit for water that has continued to evolve to provide for the demands of an efficient farming operation and the environment of soil and water conditions.

Today we have pipe that is delivered to the field on mega-size coils of thousands of feet, and on some reels there’s nearly a mile of three-inch-diameter pipe. This enables a contractor to tile acres of land rapidly. The very design of the HDPE pipe that permits perforations, which allow water to enter the system and be drained away, is the key.” PPI is the major trade association representing all segments of the plastic pipe industry.

Today, installing a system is vastly easier due to advances in machinery and the pipe. “I’m a fourth-generation drainage contractor,” said Bart Maxwell, Maxwell Farm Drainage (Crawfordsville, Indiana). “We started in 1910, and we’ve seen a lot of things happen over the years. We started with clay tiles and cement, and some of the first plastic tile was put in by my dad, Bart Maxwell, Sr.”

According to PPI’s Radoszewski, “The concrete folks like to say that their 100-year product life cycle is proven, because some of it has been in the ground for 100 years. But now it’s not automatic to replace it with reinforced concrete pipe (RCP), which is heavy, difficult to work with, and some contractors report there could be as much as a 30 percent cost advantage of HDPE pipe in labor and materials verses RCP. Installation of HDPE pipe can be done with an excavator, chain digging machines or a trencher.”

“We experience so many different soil types and conditions,” Maxwell commented. “We usually try to look at it from the standpoint of ‘if there wasn’t any tile, how would we tile this field?’ You can’t of course do it without factoring in the course of the old concrete or clay tile.

“One factor is the grade we use installing the pipe . . . . It could be a tenth of a foot per 100 feet of fall, or five-tenths of a foot per 100 feet. The grade is based on each job,” Maxwell said. “We are very cognizant of the need to increase the size of the pipe based on the lack of grade. Using GPS, we survey the field and plot the topography, lay the main in the lowest parts of the field and keep at least two feet of cover over the pipe just because of the depth of some of the farming tools. Three feet would be great on a 24-inch tile. Sometimes we’re 12 feet deep to catch really low areas such as at the end of the tile run. When you’re doing gravity drainage, and you’re not able to pump, you have to have constant flow through that pipe.”

Maxwell generally uses a trencher machine wherever possible instead of an excavator.  “A key factor is that we can cut the trench with a contoured bottom so the soil is not disturbed on the sides and putting some gravel backfill is the extra insurance and then the native soil.  There are some places you can’t use the trenching machine and have to use a bucket excavator and this means more stone has to be used.  Our trencher also grinds the soil finer than just excavating out.  So when you push it back in you don’t have large chunks.  We backfill with number 8 gravel or stone to bed the pipe.”

To allow the trencher to more easily follow the natural contour of the land, Maxwell fitted it with a shorter boot. To facilitate a safe installation with this shorter boot behind the trenching machine, he used shorter lengths of pipe – 13 or 14 feet, and as short as 8-1/2 feet.

Maxwell uses a 1971 Buckeye Super 7 Trencher. “Buckeye is building me a new one that will be delivered in October that will lay up to 36-inch-diameter pipe. The one we have now is slow by trenching standards, but as far as someone digging with an excavator or a backhoe goes, it’s very fast . . . about six feet a minute, that’s 36 inches wide, six to seven feet deep. In a day’s time, it’s no problem to do 2000 to 2500 feet, a half-mile of 24-inch or 30-inch-diameter drainage tile. We run Fratco XD Class II perforated pipe. On the farm field, we want perforated all the way around, which really drains the field.”

“Once we install the new HDPE pipe,” continued Maxwell, “we go back and destroy the old tile, cut another trench on the opposite side of it to find any laterals coming in, so we can hook those in to the new system. It’s typical to lay about three trenches total to accomplish the job and we usually have a crew of seven to operate the trencher, feed the pipe and backfill.”

Developing the plan
Cummins and the five-member Montgomery County Drainage Board mapped out a program that included pinpointing the drains to be rehabilitated and a fair tax assessment plan. “It was a matter of going over what drains were taken care of during the past 20 years and seeing how much money came out of the assessments for these new ones,” he said.

“We don’t assess people so that as soon as the money comes in we can spend it and then be broke until the following year when the assessments come in again. In the process of examining the books, it became evident that we were spending money as fast as it was coming in. The county collected taxes over the years and at this point in time they figured out that we spent more in repairs and maintenance on fixing broken clay or concrete tile, than it was really worth. We changed the method. Now we identify the drains that are needing constant maintenance and are getting to the point of doing a reconstruction, and fixing it from top to bottom. With a new drain we can keep the landowner’s assessment at a lower rate because it will be decades before any maintenance is needed on that drain. The determining factor is the number of acres in the watershed. Let’s say we have a 200-acre watershed; one farmer might own 20 acres, another 150, and so they figure the percentage of the watershed that they own and that’s the percentage that they will pay on that project.

“It’s been during the past four to five years that we have started going gung-ho on the drain reconstructions,” Cummins explained. “We’ve put in close to 50,000 feet. That’s anywhere from 10- to 12-inch all the way up to 30-inch diameter-pipe. We have averaged four to five reconstructions a year with the smallest, generally, about 2000 feet. The longest one we’ve done to date was 6000 feet, completed during the summer of 2012 up in Crawfordsville, which is the main city in Montgomery County.”

According to contractor Bart Maxwell, “A lot of people didn’t think anyone would spend money on these projects, they just wanted to patch up the bad areas. And then all of a sudden when progress was being made, people began showing up at the Drainage Board meetings, and were willing to spend the money to get new mains so they could expand their farm drainage system, and that turned this county around. Before, some people wouldn’t do a drainage system because they didn’t have a good outlet and they were never going to spend money on this tile even though it would help them grow more crops. Now at every meeting there are several landowners saying they have a problem and want the county to fix it because they see the success of the program and the way the tax assessment is handled.”

For Maxwell, the past is truly prologue. “A customer of mine bought a farm the other day and he got a packet with information about the farm from the early 1800s,” he said. “There was also the original tile paperwork that showed it was my great-grandfather and his brother who had laid 18-inch tile across this farm. Tom Cummins plans showed that the tile is now coming up for reconstruction. It was installed in 1918 and now four generations later, I may very well be the guy who gets to redo my great-grandfather’s work.”