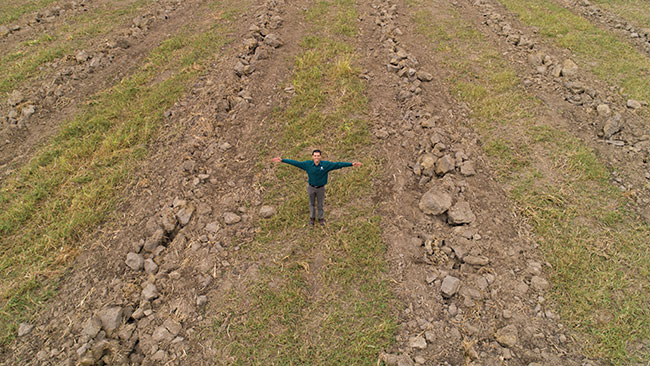 Over the last year, the concept of allowing space has become top-of-mind as people navigate their daily lives. We now know six feet is the minimum distance between people required to keep them safe from airborne viruses – and while there’s a bit more flexibility outdoors, the six-foot rule is somewhat universally applicable.

However, drains are not people – and there’s a lot more nuance required in figuring out the optimal distance. Luckily, a research project out of Michigan State University (MSU) aims to help contractors narrow down (or, conversely, widen up) what exactly the optimal distance is.

The efficacy of subsurface drainage is highly dependent on the spacing of the drain tile. Sparser tile means less water is removed at a quick enough pace, causing excess build-up of water and ultimately risking lower-quality crops and/or yield loss – but narrow tile poses just as many risks.

“Slower drainage means more water stress on the crop,” says Ehsan Ghane, a professor of biosystems and agricultural engineering at MSU and drainage specialist with MSU Extension. “[This] inevitably leads to yield loss.”

But, according to both a 2004 study from the Journal of Environmental Quality and a 2017 study from MSU, tile that is spaced too closely together increases the cost of the drainage system and reduces profit, while also contributing to higher nitrate losses. “It is also not good environmentally,” Ghane adds.

His close work with drainage professionals revealed the problem, but Ghane relied on his engineering background and a passion for precision to find the solution, leading the team on the year-long process to study and develop the ideal drainage spacing tool as a guide for contractors. Besides Ghane and his team (which also included Ian Kropp, Amirpouyan Nejadhashemi and Babak Saravi), the tool was developed in partnership with MSU’s Decision Support and Informatics Lab. Now, the research is ready for the world to see – and to use.

The tool is already for the pro-drainage crowd – both drainage contractors and those hiring them. It operates under the assumption that subsurface drainage is the best way to approach a water management strategy in corn-soybean rotation. Overall, it aims to help drainage contractors find the optimal spacing for their tile – which, Ghane says, is something that they’ve generally had to judge for themselves.

“Drainage contractors typically decide and choose spacing based on the judgment that they have developed through their years of experience,” Ghane says[SC3] , adding there’s nothing wrong with using your judgment. “The other most common method is to refer to local drainage guidelines that have been developed decades ago that recommend a range of drainage spacing for the particular soil series.”

But those guides can pose problems too. “It is sometimes a big range,” he says. “For example, it might say, ‘you need 40 to 90 ft. of spacing.’ What do you pick? And how do you know what to pick? There’s not an easy way to guarantee maximum economic benefit or maximum profits.”

Using the tool
The tool, which is free to use and was funded by Michigan State University and the USDA NIFA Federal Award grant, is built around a geographic user interface. The tool uses site-specific data on factors such as soil conditions and weather data to estimate the optimum drainage spacing. All of the data on the app is standardized – soil and weather come from 29 years of data (1990 to 2019) from the GSSURGO database (USDA-NRCS) and the PRISM Climate Group database, respectively.

Users can log onto www.egr.msu.edu/bae/water/drainage/drain-spacing-tool and navigate to their desired field in the Midwest region. Once they arrive at the field, they will be prompted to draw a polygon around their area of interest. From there, they will add inputs including corn planting date and planting depth. Resulting outputs include recommended drainage spacing (in feet), design drainage coefficient (inches per day), estimated length of four-inch drain pipe required, estimated initial cost, estimated long-term annual discharge (inches) and more. 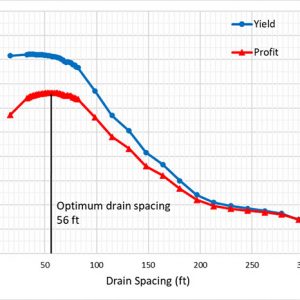 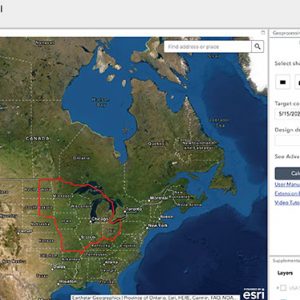 The drain spacing tool is web-based and uses map data. All of the data on the app is standardized, including soil and weather data.

Ghane notes users may find a shaded layer on top of some fields while searching, which indicates soil that may not need subsurface drainage based on their drainage class. He also says just as the spacing of tile affects many different elements of an agricultural operation, the spacing itself is also affected by many different elements including economics, style and cost of pipes, climate and more. For that reason, the tool also includes advanced input settings to allow more tailored analysis.

“One of the other things [you can input] is different combinations of corn and soybean rotation,” he explains, adding that the tool is not optimized for so-called “truck crops” – tomatoes, lettuce, melons, beets, broccoli, celery, radishes, onions, cabbage and strawberries. “It’s different [for those crops], which requires more intense drainage because of the vulnerability.” The tool is not valid for subirrigation.

The tool uses an equation developed by Ghane and his research partners to estimate spacing. The equation was based on modeling work for continuous corn production for three different drain depths and five soils at four locations (Albany, NY; Urbana, IL; Lansing, MI; and Waseca, MN). The equation plots both yield and profit on a graph with an X-axis of drain spacing and Y-axes of both relative yield (percent) and average annual return (dollars per acre). Where both lines are at the highest peak is the optimum spacing. For example, the team calculated the relationship between drain spacing and 30-year average annual ROI for a Drummer silty clay loam soil in Lansing. The peak of the profit was at 56 ft for drains installed at 2.5 ft depth. At that point, the yield line was also between 80 and 85 percent.

While the tool is still new and Ghane has only recently begun marketing it, he says use has risen gradually. “So far, I’ve heard good things,” he says, regarding the feedback. He adds “there’s going to be some transition required,” because up until now, so many contractors have been relying on their judgment and own rhythms. He also encourages users to verify the site’s soil properties to ensure they are matched with the tool’s data.

He says it should never be a case of either/or – the tool is meant to complement the contractor’s judgment and experience, not as a replacement. “The spacing tool should be used as a guide. It estimates the spacing, but you should use it as a guide. For example, if it says [to space the tile] 38 ft, plus or minus one foot is not going to do any harm. But that doesn’t mean to space it 58 ft, or 28 ft.”

As a rule of thumb, he says, if a contractor is unsure, it’s better to go slightly wider than the tool’s estimates than narrower. According to the team’s research, avoiding too narrow of spacing provides additional water-quality benefit by reducing nitrate loss. The tool can also help boost water quality by encouraging the adoption of shallow drains, which reduce nitrate load more efficiently than deeper drains.

Moving forward
After a year of hard work, Ghane says, it’s gratifying to see uptick in use from contractors, to receive questions on how to use and to get feedback – most of which, he says, is positive.

However, he adds, because the tool was developed and tested in Michigan, its application is mainly useful for soil types in the Midwest. That already covers a fairly wide breadth of areas – beyond Michigan and the surrounding states, Ghane says it’s also appropriate for use in Southern Ontario’s clay-based soils, meaning some of Canada’s contractors can benefit as well.

The Midwest is a great starting point, he says, because of how predominant subsurface drainage is in the region. But the practice is growing in other areas such as in the U.S. Mid-South and in Western Canada. Ghane says while his team hasn’t independently sought collaboration with partners in those regions yet, it is open to collaborating with extension schools and other research bodies to adapt the drainage tool for other areas and soil types.

“If people really want or need it, I would say we are willing to add those by request, location-by-location,” he says. But he says the Midwest was the obvious place to start – and the area most in need of the tool. “In Michigan and in other parts of the Midwest, as well as Ontario, the reason there is such a need for drainage is that some of these soils are truly poorly drained soils,” he explains. “They don’t drain quickly enough to provide aeration for crop production.”