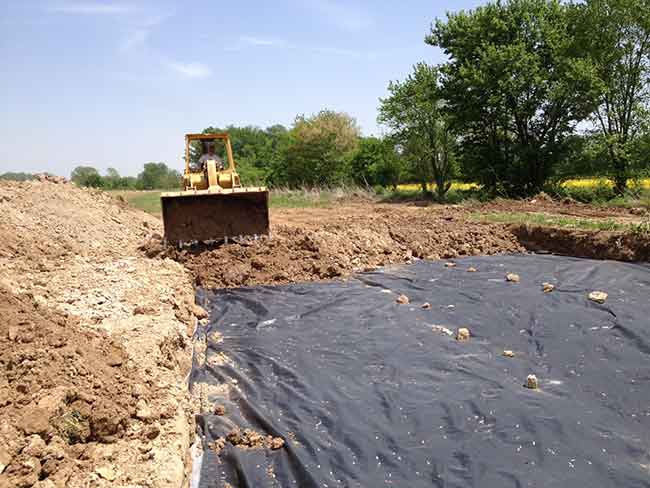 It’s a short jump to change many drainage systems into drainage subirrigation systems, says Mark Nussbaum, an area engineer at the United States Department of Agriculture – Natural Resources Conservation Service (USDA-NRCS). Add a bioreactor intended to eliminate water pollution and it equals good news for farmers and the environment.

Nussbaum should know. He is involved in a project at Southeast Missouri State University’s David M. Barton Agriculture Research Center in Missouri where researchers monitor how a wood chip denitrification bioreactor installed in May 2014 works with the centre’s controlled, subsurface drainage and irrigation system.

The university installed the drain management system in 2007 on a 100-acre piece of land consisting of bottomland soils that were historically wetter than desired, but were not wet enough to be classified as wetlands. “We always check to ensure that potential project areas are not mapped as wetlands,” Nussbaum says.

The question then was “What can be done to improve the land?”

The consistently low yields were usually due to waterlogged soils, but sometimes due to lack of sufficient rainfall during the growing season. Accordingly, the project’s goal became removing surplus water from the soil during wet periods and supplying water to the soil during dry periods. Enter the above-mentioned controlled, subsurface drainage and irrigation system, which consists of a series of parallel four-inch subsurface conduits spaced 30 feet apart collecting into eight-inch conduits to transport surplus water to field ditches. This provides the system with the capability to maintain a water table beneath the entire installation.

These improvements take the system beyond a typical drainage project and to a drainage water management (DWM) system.

DWM systems typically cost more during installation, but they pay dividends for the entire life of the system.

At the Barton Center, conduits were placed 30 feet apart, as compared to 50 to 60 feet apart for a drainage-only system. Stop log boxes are arranged to permit the restriction of water flow, monitor irrigation and allow well water to be added and dispersed throughout the system by gravity flow. The centrepiece of the irrigation pumping system is a solar panel array having the capacity to pump 70 gal min-1 (265 liter min-1) during the daytime, with additional conventional wells added to provide water when solar pumping alone doesn’t fully supply crop water needs.

“The site is managed with a dormant season cover crop with controlled drainage during the winter and subsurface irrigation during the growing season,” Nussbaum says, adding that in most years, managers add an average of five inches of subirrigation water, representing a 50 percent water savings when compared to typical surface irrigation in the region.

“The issue with surface irrigation is that you have some water loss during the application process as well as more evaporation from the wet soil surface over the next couple of days,” Nussbaum says. “In our conventional irrigation, typically just over half of applied water is lost to evaporation; the rest is actually used by the plant.”

However, when producers irrigate from below, the surface remains dry, while at 18 to 24 inches, the plant has all the water it needs. “There is zero percent water loss during application to run off and evaporation,” Nussbaum says.

The next step for researchers was to see how much they could reduce nutrient losses, particularly nitrogen, with various practices. Practices being tested include precision fertilizer application, cover crops and adding a bioreactor to the DWM system.

“The bioreactor was installed with the purpose of treating the drainage water for excess nitrogen in an economical manner,” Nussbaum says. He explains that a total of 27 acres drains through the wood chip denitrification bioreactor.

That is exciting news considering the U.S. Public Health Service suggests 10 ppm, or 10 milligrams per litre, of nitrate-nitrogen as the maximum for safe human drinking water.

“The denitrification bioreactor has received a year’s worth of drainage water wherein approximately 70 to 90 percent of the nitrate load has been converted to harmless nitrogen gas,” Aide says. “We are planning on construction of a second bioreactor.”

The second bioreactor will be a mirror image of the existing one and will provide researchers with an opportunity to see how cover crops and precision application of nitrogen, combined with DWM and bioreactors, can reduce nitrogen losses even further in a variety of crops and settings.

Other emerging research explores the water savings subirrigators experience compared to typical surface irrigation. To this end, another project slated for this year at the university is the construction of a water storage reservoir to store dormant excess season drainage water from a 20-acre portion of the research farm. The excess water will be used to subirrigate the same area the following year.

The combination of the DWM and reservoir will provide full irrigation without ever using aquifer or surface water. “It will be a self-contained loop,” Nussbaum says.

This has major implications for the environment. “Nitrogen losses via drainage water will be drastically reduced because most years little tile water will leave the field, and the field will no longer draw upon aquifer water for subirrigation.”

“When the economics of the total drainage management system, including subirrigation, are better quantified here and elsewhere, I believe it will show that there is a great opportunity for the installation of similar systems and that is a big plus for the drainage industry,” Nussbaum says. “There is tremendous opportunity in DWM to add cover crop management, subirrigation and reduced off-site nutrient losses to traditional aspects of drainage.”

“This technology, where appropriately applied, may become a large piece of the North American environmental issue associated with fresh water eutrophication,” Aide says, explaining that when combined with appropriate fertilization practices, riparian buffers and cover crops, this technology, “will likely solve, to a compelling extent, water quality issues across North America.”

The drainage industry can be an important part of the process.

“More and more farmers want to drain, but they also want to see if they can irrigate in the summertime,” Nussbaum says. “They want quality drainage, subirrigation capabilities and to raise better crops on wet soils. If they install a DWM system, they are better able to do all three.”

From a business perspective, it’s good news for drainage contractors as well.

“It is almost the same process to drain as to add water,” Nussbaum says. “On many sites, it’s a short jump to change a drainage system into DWM and the odds are very high in those flatter areas that if they design with drainage and subirrigation it is going to be very profitable.”

He estimates that using one system for two compatible purposes – drainage and irrigation – will need about 30 to 50 percent more drain tile per acre.