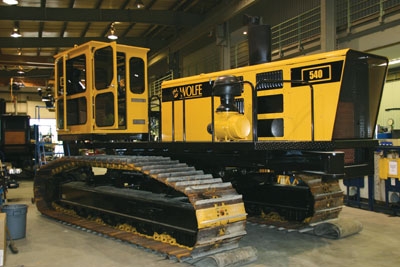 The latest Wolfe 540 plow: design updates will be available soon. Contractors must plan well ahead if they want to take delivery of a new or recent-model

Contractors must plan well ahead if they want to take delivery of a new or recent-model, used drainage machine. For their part, manufacturers are cutting, welding and fitting to meet the demand. Such is the state of a booming industry! A whirlwind survey has yielded several pieces of news on the specialist drainage machinery front.

Wolfe changes ownership, moves to new shop
The next design changes of Wolfe Drainage machines will be introduced early next year, according to Ed Veeke, the principal of the company that purchased Wolfe Equipment in June this year. The business now trades as Wolfe Heavy Equipment. Customers can expect design changes. “Operator station upgrades will include improved creature comforts, increased size of cab, an air-ride cab and improved visibility of the work zone,” he says. Improvements are also being made in machine design to allow better access for maintenance, improved cooling, faster hydraulics, Tier 4 diesel compliance and improved overall esthetics. Veeke adds that, in the longer term, “We intend to have a full line of drainage and trenching equipment.”

The company recently delivered its latest machine, the Wolfe 540 plow with a parallel link drainage plow assembly and increased ground speed when out of the ground. This machine was built in the new facility at Strathroy, Ontario, a 48,000-square-foot fabrication and assembly plant. Company personnel Keith Gillies and Dave Bechard continue with the business under the new ownership.

Records spin at Northland
In Minnesota, Northland Trencher Sales’ Larry Neid reports: “2012 will be a record-setting year in sales for our company.

New machine orders continue at a steady pace and the market is very good for late-model used trenching equipment.

Plows are outselling trenchers by about three to one, and the largest model 2050GP plow is the favored size.” He adds that Northland offers buyers a choice of Cat or Volvo power in both plows and trenchers, with Cat being chosen more often. Lead time for new machines is currently one year from order to delivery.

Recent changes and upgrades have been made on the Inter-Drain lineup as well as some fine tuning on existing models. The “SP” model plows that use single cantilever technology have been reconfigured to accommodate the Big “3” wide cab, which is the cab of choice. The company’s USA Package has been extended to include climate controls on the heating and air conditioning system. Larger high-speed track rollers have been added as well. “A popular new option in 2012 was the power grease system that will make the grease gun a fond memory,” adds Neid. On the trencher side, Inter-Drain now offers the larger 3035 model in the swivel steer 3035NT configuration, much like the popular smaller 2028NT. “This allows the track machine to turn a very short corner similar to a rubber tired trencher,” he says.

BRON plans trencher
While plow production is pumping hard to keep up with demand at RWF BRON, manufacturing has begun on a new wheel trencher at its plant in Woodstock, Ontario. This machine will dig a 36-inch-wide trench to 7 ½ feet deep. Powered by a 440-horsepower Cummins diesel, the first prototype was to have been completed late September 2012. Coming soon, says BRON’s sales manager, Mark Odorico, will be a new low-cost, self-propelled drainage plow, with expected delivery dates from the spring of 2013. The machine will feature D6 undercarriage and a 350-horsepower diesel. “Target weight is 68,000 pounds,” says Odorico.

On the turf
It’s just over a year since sportsturf drainage specialists Shelton SDS launched the Supertrencher+ 760. Mick Claxton, general manager for the company, says the machine was built as a result of customer feedback. The initial concept came about almost three years ago, after the team had received a number of enquiries from customers asking for a trenching machine with improved performance in wet conditions as well as dry. Shelton’s design team developed a prototype machine and, after successful trials, a production version was engineered: the Supertrencher+ 625. This machine was successfully sold for 12 months and was capable of installing the majority of systems. However, drainage specifications in some countries called for deeper and wider trenches for sportsturf pipe work, so the team enlarged the design of this machine to create the Supertrencher+ 760, with digging capabilities to 760 millimetres deep and 155 millimetres wide (30 inches and 8.25 inches).

The two-speed gearbox driving the digging wheel enables the operator to better match the digging speed of the wheel to the soil conditions: slow for wet soils and fast for hard, dry soils. The offset of this gearbox enables the machine to run down the center of the tractor. A removable section of the hood at the back of the machine enables the cutters to be changed from a standing position, which is a benefit to the operator for both ease and safety.

Dual path control and parallelogram depth regulation
The Steenbergen Hollanddrain model EGS 3000 is available with a multifunctional joystick. This is a unique feature, which is highly appreciated by operators. The one-hand controllable joystick with numerous functions can steer both tracks and is called “dual path control.” Differences in track speed will be corrected automatically in forward and reverse modes.

The mechanically driven digging mechanism and homemade “right angle gearbox,” chain transmission and safety clutches have all proven their durability.

The “parallelogram depth regulation” system, available on the EGS 3000 model, results in the most accurate depth regulation possible. Hollanddrain believes that precision depth regulation methods and the way drainage pipe is placed are some of the most important requirements of landowners and contractors alike.