Rules change: ‘Drain it and forget it’ not an option. 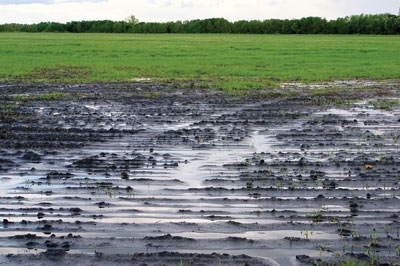 Expectations for farmland Land improvement by drainage is not quite what it used to be in Manitoba.

Land improvement by drainage is not quite what it used to be in Manitoba. A potato grower with extensive tile drainage and a municipal official gave two views of the complex story to a packed house at Ag Days 2011 in Brandon, Manitoba.

As of late 2009, Manitoba’s new “minor works” regulation for drainage began requiring that a permit be obtained for every land title in the province where some drainage is needed. If the farmer wants to assist any surface water to come off a field and into a ditch or outside the property boundary, it is considered a minor work that must be licensed. The one-time fee is $25. Once approved, the permit is attached to the land title “in perpetuity” without any further requirements. “As a municipality, we’ve really impressed on our producers that this is an opportunity, to get on to a piece of paper which is attached to your title, the right for you to drain your land. We’re really licensing drainage you already have,” says Shawn McCutcheon, reeve for the Rural Municipality of Dufferin (the region’s administrative seat is located in Carman). “I think this minor works one is really good. For a small amount of money you get to protect what you’ve already done, and it’s a one-time licensing cost.”

McCutcheon says the concept is really about more than drainage. The larger issue is resource management. “It can’t be just, ‘drain-baby-drain.’ We have to talk about wetlands, talk about retention. We should show we’re managing water in a responsible fashion, and it has to make sense, environmentally, in the long term.”

Time has changed the drainage picture, McCutcheon says. Most municipal and provincial drain systems were designed in the 1950s or earlier. Today’s farms are larger with larger fields, crops that are more valuable and technology that allows farmers to do a better job of moving water into public drains and ditches. “Off the same land, there is significantly more water being moved today than there was just 20 years ago,” he explains. “We have technology to reshape our land and move this water, but we’re putting it into an antiquated system.”

Individuals, municipalities and the entire province stand to benefit by a concerted and co-ordinated effort to improve this resource management, he suggests. It applies to sloughs, surface ponding and even sub-surface drainage.
Gross farm production on 165,000 cultivated acres in the Dufferin municipality is currently valued at more than $65 million, annually. If better water management enables farms to increase production by 10 percent, that is a $6.5 million direct boost to incomes, with substantial spin-off benefits. “I think that’s an achievable goal,” McCutcheon says.

Tile drains
On the opposite side of drainage, experience with a major investment in tile drainage was described at Ag Days by Stan Wiebe, of MacGregor, Manitoba. The manager of Beaver Creek Farms Ltd. said the farm’s first commercial potatoes were produced in 1968. The family farm began installing drainage tile in late 1997.

The first project was a 270-acre field with a history of losses due to wetness. Tiles were installed on 50-foot spacing with gravity flow to a municipal ditch. That was the end of the “wetness” issue; payback for the investment took seven to 10 years.

Every year since then, Wiebe says, Beaver Creek has averaged another 400 acres of tile installation. The farm has about 9000 acres in production, with 5200 acres tiled. Seeded potato acres have slipped a bit, from the 900-acre range at the start of the tiling program to about 800 acres today. “Everybody is targeting higher yields to get volume contracts,” Wiebe explains. “Our general target today would be 30 to 40 percent more volume per acre than we did in 1997. There’s a variety of reasons and, for us, tile is a big part of it. Irrigation is more common, too. There’s more intensive management, of every aspect.”

Beaver Creek has focused on getting the most return for its substantial investment. Wiebe started with what he refers to as the ‘worst’ of the fields he planned for potatoes in 1997, and has made that a pattern. The farm now is close to completing the program, yet not every field will be tiled. My recommendation to anybody is to start with your most vulnerable, most dramatically affected fields. That’s where your payback will be the highest,” he says.

Tile spacing amounts to a risk management choice. Tighter spacing costs more but provides better protection for heavy rain events. Tighter spacing would have helped more in 2010, when they had three five-inch rainfalls, but even those only led to minor potato losses with their current system.

Crop value also needs to be considered. Payback is fast with potatoes, good with canola, corn and soybeans, yet slow with a cereal grain. Payback can be 20 percent if tile stops a good field from drown-out every second year. “Our overall average yield increase is in that 15 percent range, with a four-year rotation of potatoes, wheat, corn and canola,” he says.

That is for an investment averaging $750 per acre for tiles with 50-foot spacing, large fields and gravity flow. If a field was smaller, or if it needed a pump station at the low end, costs could be more than $1000 per acre. The cost split is roughly 65:35 for material and installation. “The whole picture has to be analyzed by professional people;  otherwise, you don’t know. They will give you a quote so you know in advance exactly what you’ll be paying.”

Loan managers are becoming very interested in tiling. They analyze it case by case, but the benefit is obvious once they fully understand the impact on a farm.

Anyone interested in starting a tile drainage program needs to plan. The work probably has to be installed in the three months between harvest and hard-frozen ground, although a grower needs to allow a year or more to prepare the plan, get financing and obtain the drainage license.

The good part is that Manitoba now has three tile drainage contractors, a company that manufactures tile locally and bankers who understand the system, Wiebe says.

Minor use regulation
The Province of Manitoba introduced a policy called Expedited Authorization of Minor Water Control Works in September 2009, says Perry Stonehouse, manager of water control works and drainage licensing for the Manitoba Water Stewardship department. “‘Minor Works’ are a group of works that are unlikely to cause significant impact. The authorization is good for perpetuity and separates them from works that are more likely to cause impact,” Perry says.

The typical minor work involves fall field drainage work with a V-ditcher or a small scraper. It opens the course for water to leave a field more efficiently in spring. When the field is ready for spring traffic, the field drain gets cultivated and treated as does the rest of the field. “The intention is to authorize those works that have little chance of causing impact, really quickly,” Perry explains.

It also applies to municipal work. A minor work permit is required for replacing culverts. If the culvert is in a new location or if the size is upgraded, it will need a standard permit.

In fiscal 2009/2010, the department issued 1232 licenses. Most were for minor use situations. As of February 2011, the largest backlog of permit requests was in the Red River Valley and the Interlake.

Each proposal is reviewed on site. Applicants must wait for snow to be off the land.

Information, policy information and forms for drainage work are available from Water Stewardship offices and online at www.gov.mb.ca/waterstewardship/licensing/index.html. The application must include a drawing of the proposed drainage work on an aerial photo. The photo can be supplied by a Water Stewardship office. “Our goal is not just to track works but to reduce the probability of impacts by examining proposed works,” Perry says. “If we get a complaint, then we can go to our database and have accurate information.”