Features
LICO Update: What are we learning from Huronview? 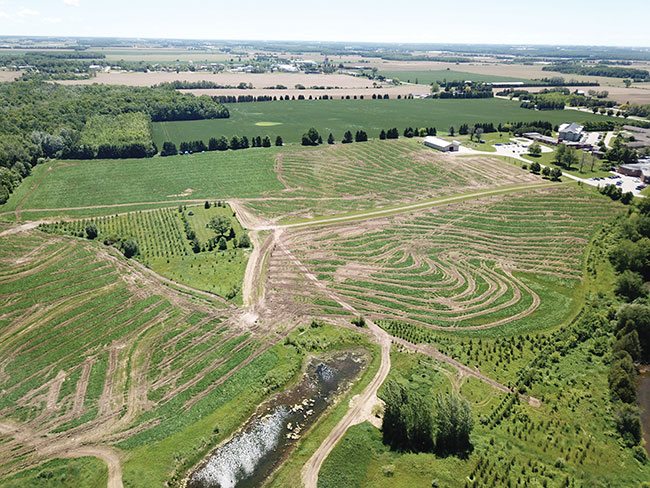 Growing concerns for water quality and quantity have both drainage and agricultural stakeholders alike investing in drainage innovation and research.

So, there are a lot of eyes on the Huronview Demo Farm, just south of Clinton, ON. The 47-acre silt loam field is owned by the County of Huron and, since 2015, it has been farmed by the Huron County Soil & Crop Improvement Association (HCSCIA) to demonstrate no-till and cover cropping in a corn, soy and wheat rotation.

In 2019, drainage systems were installed by Land Improvement Contractors of Ontario (LICO) contractors, designed by Jeremy Meiners (AGREM). The field has several sub-watershed areas within it that research and demonstrate various types of drainage innovations.

The installation was supported by federal and provincial funding, with financial and “in-kind” contributions from the project partners and sponsorship from the drainage and agricultural industries. However, the most significant and ongoing investment is towards the field and water quality monitoring, which is being undertaken by the Ausable Bayfield Conservation Authority (ABCA) with both private and public support, including provincial ONFARM research funding. Both tile and surface water in the south field are being measured for flow and quality, along with flow from the tile layouts in the upstream fields and water levels and quality monitoring of the two wetlands. Water levels in the soil are being monitored through piezometers installed between laterals and soil moisture probes used at the plant root zone. A weather monitor, soil testing and yield mapping also help to tell the complete story.

The original project team continues to meet, discussing field management, research, communications and ongoing funding for monitoring. Last winter, they surveyed about 60 Ontario farmers about their attitudes towards drainage and water quality, along with their thoughts on the Huronview project.

Respondents were interested in the costs of controlled drainage systems and whether they would increase yields and improve water quality. Many of these questions will take several years to answer, but the installation costs were shared in a report that is now available at the project website (www.huronview.net). The report estimates that contoured drainage costs approximately 15 percent more than conventional, and that the additional cost of control gates would depend on the style of gate and the topography of the field. At Huronview, the steepest slope was installed with a gate on each lateral, 21 control gates in total, which added costs of around $1200 CAD per acre.

Yields improved significantly since the installation. However, production on the untiled portion of the field rose in the same proportion, and the HCSCIA farmers noted that the springs and ponding were no longer concerns there-.

Production, however, lags in small areas at the contoured swales in the northern field, due largely to compaction from 2019. While these terraces might be more commonplace south of the border, they are relatively novel in Ontario with its often-shallow topsoil. At Huronview, the base of the primary swale was shaped from the spoil of the tile outlet wetland that was dug, while the smaller bottom swales were shaped from the soil that was there. Ongoing reports will be added to Huronview.net, along with LICO’s new website at drainage.org.