Features Contractor at Work
It’s in the blood 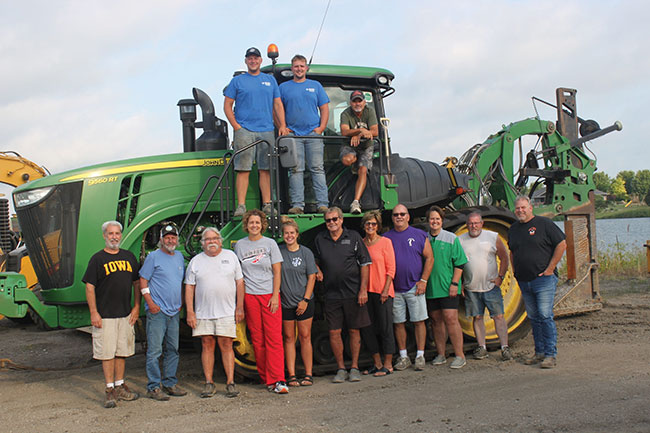 Jim and Diana Blood (front row, center) and their daughter Tracy Sheckengorst (third from right) consider the crew at Iowa Drainage a part of their family. Image courtesy of Tracy Shreckengost.

Jim Blood has tiled around the world. No, he’s never created a trench in Taiwan or dug a ditch in Duesseldorf, but after 50 years, Blood’s company, Iowa Drainage, has laid approximately 177,983,955 feet of tile – enough to stretch around the world and then some.

Blood first hit that milestone in 2009 when his company, Iowa Drainage Shop, hit 131,482,560 feet, and the company has remained ambitious since then.

As he reflects on his 50 years in the business, Blood is filled with gratitude for the influences that pushed him into tiling, for his customers and for his family. When asked about tiling, his face lights up and he speaks about tiling less like a job and more like it’s a member of his family. “I love it. I’ve loved it for my whole life,” says Blood. He’s still in the office every day, doing what he describes as “a little bit of everything.” Business isn’t slowing down, says Blood, so neither is he.

In the beginning
Blood first set up shop when ABBA’s “Mamma Mia” was on the charts and the video game Pong debuted. “In July of 1972, a contractor was retiring from the tiling business, and that business had come up for sale,” Blood explains. “I bought the business; [the seller’s] brother-in-law came along with the business and taught me the ropes.” Jim’s wife, Diana, also became an owner of the business, and has been his right-hand woman from the start.

Originally from Sheffield, IA, Blood’s father worked as a superintendent at Sheffield Brick and Tile Company for years. “I’d worked there off and on when I was in high school and throughout college.”

With a naturally wet landscape, Iowa is one of the biggest markets for subsurface drainage in the U.S. While it is sometimes difficult to quantify the amount of drainage activity in key areas because there are no comprehensive records of drainage installed over the last century and the amount of agricultural tile drainage installed every year is not recorded, expert estimates name Iowa as the U.S. state with the most drainage activity. According to the USDA National Agricultural Statistics Service 2017 Census of Agriculture, Iowa represents 25 percent of tile-drained acres in the U.S. The next-highest state is Illinois, at 17 percent. It also continues to grow. An estimated 14 million of 24 million acres of crops in the state are tile-drained, representing an 11 percent increase between 2012 and 2017. Growth in tile drainage demand in the state is mainly driven by farms larger than 200 acres.

He points to Arnold (A.C.) Benton of Hampton, IA as one of the important figures in the early days of Iowa Drainage. It was through Benton, a well-known dealer of John Deere equipment in the Hampton, Iowa Falls and Geneva area, that Blood got started doing pattern tile work. “It kind of mushroomed from there.” Blood has been a loyal John Deere user; currently he uses a Track John Deere 95-16 with a link plough.

The company’s backhoes and excavators, which are in the dozens, are all from Caterpillar, plus one SpiderPlow.

Blood also points to two early customers, Jeff Brakke and Doug Studer, whose loyalty helped the company establish a strong reputation. “We’ve done thousands of tiles for them over the years.” 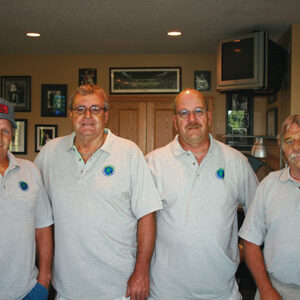 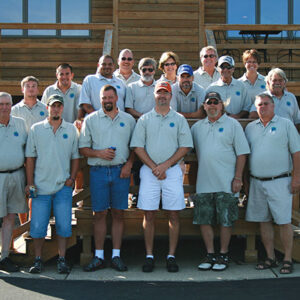 The staff at Iowa Drainage celebrated their “Around the World” milestone in 2009.

Growing the business
One other important ally to Blood is his daughter, Tracy Shreckengost. While Shreckengost’s title is “office manager,” she describes her role as “a little bit of everything” from administration to field work and moving tile. She is Blood’s literal family, but she says the strength of the company is in the loyalty of its employees, which also function as an extended family.

“We’ve been fortunate enough to have employees that started with us and never left,” says Schreckengost. Some of the longest-serving employees include Dale Brayton (49 years), Jim Rooney (47 years), David Siskow (42 years), and Francis Best and Tom Schmitt (both 38 years). Overall, the Iowa team includes Blood, his wife Diana, Shreckengost and 11 other employees, plus two extra helpers during the busy season. Among those 11 employees is Shreckengost’s daughter, Sydney, making Iowa Drainage Inc. an official “three-generation” family business.

Operations have expanded over the years. In 1982, Blood added Minnesota Drainage to the portfolio, setting up a satellite office and a sizeable crew out of LeRoy, MN. Later, he added another office in Fort Atkinson, WI. At one time, there were three different crews tiling. Since then, he has sold the Minnesota business, but the Fort Atkinson operation remains.

Throughout the years, there have been challenges – as well as innovations that have made tiling significantly easier.

Blood and Sheckengorst agree that the biggest challenge is the weather – unsurprising in the notoriously precipitous Iowa. Between the rain and the snow – which Sheckengorst says can sometimes last until mid-April – she describes the window of opportunity for tiling as very small.

“The farmers are pretty much right behind you trying to get their seeds in the ground,” says Sheckengorst. “So our window will always be pretty small for that.”

Those seasons can be stressful, but Blood smiles and says, “You gotta do what you gotta do – you gotta get that tile in before it freezes up.”

More recently, says Sheckengorst, product has been one of the biggest challenges. The agriculture manufacturing industry has been hit hard by the notorious supply chain disruptions exacerbated by COVID, labor costs and other factors. One fall, Sheckengorst says it was so bad, one manufacturer the company was working with was running out of tile.

“We try to plan ahead and have a lot of that tile stockpiled,” she says. She notes that things appear to be on the upswing, and somewhat better than a few years ago in terms of having enough supply to meet the demand. Nevertheless, Sheckengorst says the lesson the company has taken away is to strike when the iron is hot with pre-orders. Summer specials are a great opportunity for pre-ordering, she says.

Blood’s kept his knowledge current by attending a number of extension-run drainage schools over the decades, and has taken on some more diverse projects recently, such as a project that incorporated irrigation. He’s also embraced the advent of technology such as GPS – which he says has been a “life-saver” and made life much easier.

Yield monitors have also been a game changer, particularly in the state of Iowa. Blood says prior to the advent of yield monitors, most sites would have clay tile placed every 100 feet. After yield monitors became commonplace and landowers began demanding more tile, Iowa Drainage would be charged with placing tile closer than every 100 feet.

“We’ve gone in between jobs and done tiles every 50 feet,” says Shreckengost. Depending on the soil, some tiles have been placed even closer. One job, she says, required tile every 15 feet. “You should have seen that tile map,” she says, laughing. “It was like a blob of ink.”

The present (and future)
While Blood is appreciative of all the technological advances of the last few decades, he still has a special talent for being able to locate tile without much help from a computer. Sheckengorst says she’s watched Blood with awe at times.

“Jim would come [to a site] and we’d drive around, and we’d try to figure out where we’d find an outlet. Nine out of 10 times, he’d put a flag down, and the guys would dig and surely, there would be tile there.” Considering the near-118 million feet of tile laid, Sheckengorst chalks Blood’s uncanny ability up to simply having put the time in. “He just has the lay of the land.”

But it’s not just about the tile. Blood’s favorite part of the job has always been, and remains, the people. Much of his current duties involve meeting with his farmer clients to understand their needs and lay out the jobs, as well as doing all pre-construction work.

“I love the people,” says Blood. “The people, the planning… making satisfied customers.” He says he still gets cards and letters from happy clients that remind him of the value of his work. But he also has advice for the next generation of tiling business owners: focus on not only the people outside your business, but also on those inside your business.

“If you take care of your employees and treat them well, they’re going to reciprocate that,” he says. “They’ll be ready to roll with the weather and all those situations where you’re tiling outside the elements.” DC