How the right pipe properties can create more efficient drainage. 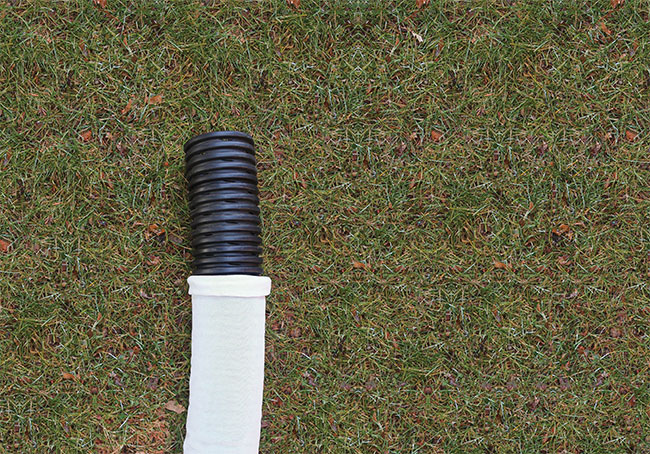 A sock-covered pipe usually costs more, but the benefits in terms of efficiency might outweigh the cost. All images courtesy of Ehsan Ghane.

Ehsan Ghane had an idea for more than 10 years. In 2010, during his doctorate degree work, he began thinking about how different types of pipes could drain water faster, depending upon their properties.

But Ghane, now an assistant professor and extension specialist of agricultural drainage with Michigan State University’s Department of Biosystems and Agricultural Engineering, had to wait to engage in the study.

“I knew there was something going on with this [water flow based on pipe properties], but I couldn’t do this [work] because I was working for someone else,” he explains. “It feels good to tell people. It was like a 10-year secret.”

Fine sand and silt builds up in pipes over time and causes clogging, thus why sock-wrapped and narrow sand-slot pipes were developed. Ghane knew that identifying which pipe worked best in a variety of sand, loam and silt combination soils would help in agriculture and other areas.

The study was conducted in Michigan, but any area with these types of soils and heavy rain falls could apply the information he reported. Any soil where clay content at the drain depth is less than 30 percent may lead to drain sedimentation issues and drainage options that reduce the potential for blockages is recommended.

The sock rocks
Ghane’s enthusiasm led to the study of each style of pipe in the field for its water entry, water-table drawdown, drain spacing and cost effectiveness. The findings benefit landowners, farmers and contractors looking to move water as quickly as possible with an appreciation of how each option stacks up. 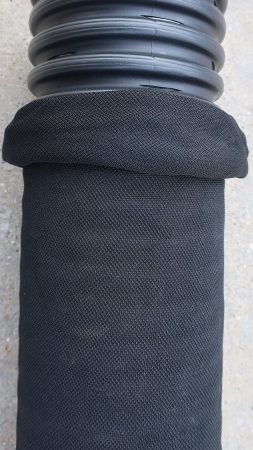 When a pipe is wrapped with a sock, it functions as though there is a pipe or a conduit without any walls.

“There’s a sock-wrapped pipe. A knitted sock envelope is wrapped around it. There are various options,” he says. “And sand-slot pipes, also known [as] knife-cut or narrow cut. It keeps the sand out with really narrow slots.”

When all conditions are equal, a regular perforated pipe wrapped with a knitted-sock envelope moved water most quickly. The eight-row perforated pipe was second and four-row was the least effective of the three options.

“My scientific research shows that when I actually tested this in the lab, the one with the sock-wrapped pipe maximizes the water entering the pipe,” says Ghane. “This happens because when a pipe is wrapped with a sock, it functions as though there is a pipe or a conduit without any walls. It’s maximized. Like a mole drain.”

However, as one might expect, the sock-covered option does cost more than the sand-slot perforated pipes. He notes the difference is about $18 USD per foot. The benefits may offset this increased cost in some cases. The eight-row and four-row pipes are usually the same price, making the eight-row the most efficient option between those two.

“It really does depend on the farmer,” he says. “If they want to invest in [sock-covered], there’s some benefits. It moves the water more quickly and it helps lower the risk of delayed planting, reduces the risk of crop damage from waterlogging after heavy rainfall. It is hard to put a dollar value on these.”

He adds that when drain depth and spacing are the same among pipe types (the study was done at 30-foot spacing and 2.5-foot depth), there can be a minor crop yield increase with the socked-pipe, but not one that covers the increased costs. Therefore, choosing one pipe over the other will need to be based on other factors.

“The eight-row sand-slot is more cost-effective than the four-row because it drains water more quickly at the same pipe material cost,” he says.

The number one pipe property that determines drainage speed is the number of rows of perforation. The second property is the length of the slots in the pipe. A sock-wrap allows for more pipe perforation with less sedimentation passthrough. The narrow slits of the sand-slot pipes (about 0.020 to 0.035 inches) also keep sediment out and more slits improve water flow.

Shallow beats deep and other in-field considerations
Shallow drains are common in Michigan, but may not be in other regions with drain sedimentation issues. Ghane recommends shallow over deep for drainage.

“They lower the water table more quickly than deeper drains,” he says.

When choosing one pipe over another, farmers, landowners and contractors need to consider if a 16 or 29 percent increase in drain inflow makes the sock-covered pipe the better option. Farmers may decide to go with the increased cost if it allows them to get into their field earlier for planting.

Earlier seeding may result in earlier or additional harvests that could provide financial benefits. Additionally, improved drainage function may make marginal land productive and could add a new source of income.

Perhaps the most important consideration is if waterlogging of fields is a common or regular concern. When it is, and crop-losses are the risk, the increased expense of the sock-wrapped pipe may be justified to drain land quicker.

In soils of a clay-mix without a drain sedimentation issue, Ghane says the same basic considerations apply as in loamy, sand and silt mixes.

“The eight-row [perforated] is the way to go,” he says. “When both [four and eight-row] are at the same cost, eight-row is going to drain much faster than the four-row.” 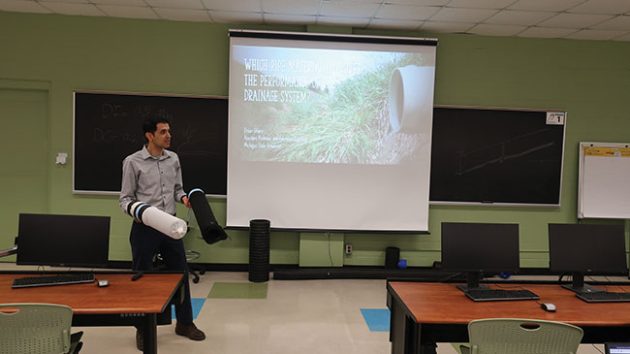 Installation is key
No matter what pipe is chosen, it must be installed correctly in order to perform as desired. Installation is ideally done at the ground’s driest point when the water table is at its lowest, but seldom does this timeframe work for a farmer who has potential income in the fields at that time. Non-farming landowners may be able to accommodate a summer installation.

Ghane recommends growing early-harvest crops in the installation year to permit dry conditions post-harvest for the install timeframe. Field work in wet conditions leads to soil compaction which will impede infiltration and percolation. Plus, installing pipes in wet conditions where the water table is close to the drain depth may lead to smearing of the soil. This is a compaction of soil around the pipe that will break up, but it can take several years of less efficient drainage to get there.

All pipe installations cause soil disturbance and increased sediment. Even sock-covered pipes may not work at peak efficiency immediately after installation.

“Once the soil around the pipe stabilizes, only a limited amount of clay particles will pass through the sock opening and water will carry them to the system outlet,” he explains.

While sunny, dry weather is preferred for installation, increased heat can allow sand-slot pipes to stretch and increase perforation size. This will eliminate the sedimentation protection. The sun can also cause UV damage to pipe socks, so these should not be exposed to the sun; or a black sock, which has greater UV resistance, should be selected.

Field drainage has always been an important consideration, but with climate change and increased heavy rain events, it has become essential. Ghane says choosing the right pipe for the situation will improve efficiency of drainage, but it must be considered in tandem with other conservation drainage practices such as controlled drainage and saturated buffers.