Features
How a ‘drainage referee’ earned his stripes

Del O’Brien on the evolution of drainage in Ontario. 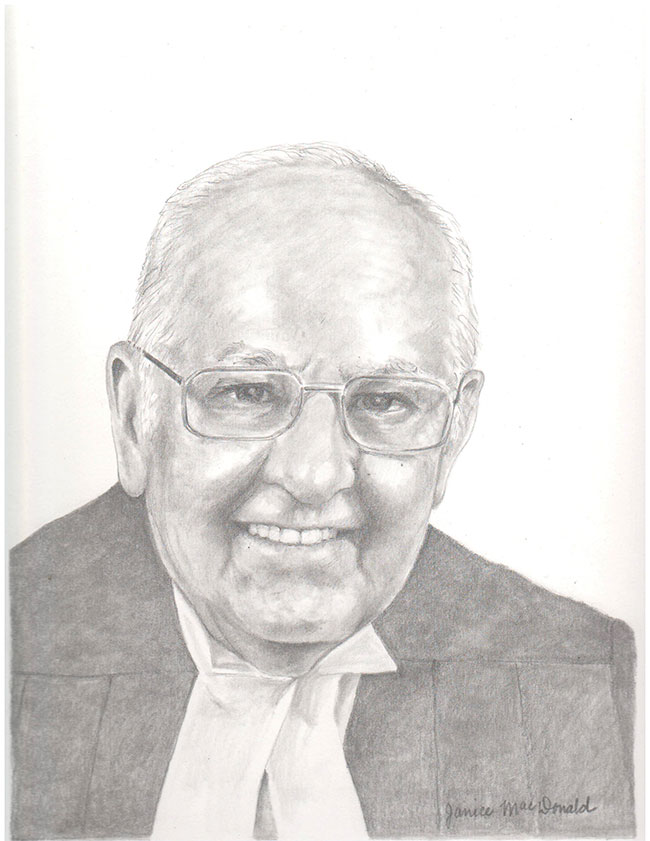 Delbert O'Brien's storied career includes work as a lawyer, farmer and spearheading the creation of the Pembroke and Pembroke Area airport. Sketch by Janice MacDonald.

At a ceremony held on June 13, Delbert “Del” O’Brien officially became one of the 2021 inductees to the Ontario Agriculture Hall of Fame (OAHF).

O’Brien, a long-admired member of the legal, political, business and agricultural community in the Ottawa Valley, always advocated for rural Ontario – across the highly varied disciplines of his career.

O’Brien has made many diverse contributions to the community throughout his life, but his nomination for the OAHF centered on his agricultural contributions in general, and specifically for his work establishing the province’s Drainage Tribunal, which mitigated disputes regarding water management on farmland.

Born in 1935 and raised on a mixed farm in Ontario, O’Brien received a doctor of jurisprudence from the University of Toronto before beginning a law practice focusing on agriculture in his hometown of Pembroke.

In 1975, O’Brien was appointed to the Drainage Tribunal during a time when drainage disputes were handled by the courts and the province was trying to implement the new Drainage Act.

Under O’Brien’s leadership, the hearings gained a reputation for being efficient and fair, and he helped provide meaningful interpretations and understandings of Ontario’s Drainage Act to individuals, contractors and municipalities.

“I met Del in 1972, when he was running for elected office for Canadian Parliament,” says John Yakabuski, member of provincial parliament for Renfrew-Nipissing-Pembroke. “I so respected the work he did, both his work on drainage and different tribunals after that. The government continued to call on him to use his expertise not only as a lawyer but for his love of agriculture. That speaks to a part of Del’s life, [but] his life was so much broader. Community involvement, beginning and running an airline and all of this going on simultaneously with his law practice.”

Representing rural
While O’Brien was in university, he learned about tribunals from a visiting professor on exchange from Columbia University in New York City, Albert Abel. 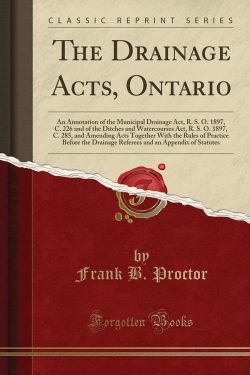 As Ontario’s “Drainage Referee,” O’Brien’s job was to make the Ontario Drainage Act understandable to landowners and contractors.

“He had strong views and I agreed with them,” says O’Brien. “I learned about tribunals and how they’re set up. Before then, the county court judges had jurisdiction to hear drainage disputes, but farmers were uncomfortable going to court in the city, some distance away.”

O’Brien recognized that tribunals should operate differently from court cases and opted to run the Drainage Tribunal in a split between Guelph and Pembroke.

“I was a bit [of a] revolutionary, mandating that I not have any offices in Toronto,” he said. “Hearings should not be in a courthouse but in the local municipality where every owner feels comfortable.”

When he was called by the minister of agriculture to set up the Drainage Tribunal, O’Brien was already familiar with the drainage issues from both the farmer’s perspective and from a legal perspective.

“Having been raised on a farm, and having a large farm that had been tile drained, they knew I knew the subject matter fully. That relieved them,” he says.

In addition to the government’s confidence, O’Brien also had the trust of the farmers and drainage engineers with whom he worked.

“When he was involved in politics, Del was one of the people that I called upon and I still use. I see him as a person of mentorship and guidance,” says Yakabuski. “I was so thrilled when he was inducted into the Agricultural Hall of Fame. Most people wouldn’t identify Del immediately with the word ‘farmer,’ because his public persona was a very accomplished and respected lawyer. This is just me saying that Del in his heart of hearts has always been and will always be a farmer, even though his career branched out in so many ways. An accomplished lawyer, entrepreneur, community leader [and] business leader.”

Understanding the Act
When he was first appointed to establish the Drainage Tribunal, O’Brien dedicated himself to studying the Drainage Act until he had it memorized. He also studied applicable material in the common law and was a regular guest speaker at drainage conferences.

Hearings regarding drainage issues were held in local municipalities. Those sitting on the tribunal were experts in the subject matter and, as a result, there were very few appeals once a decision was made.

“I always had two farmers and one drainage engineer with me – we were a panel of four. Generally we were able to conduct a hearing in one day. We were very efficient from that point of view,” he says.

Serving on the Drainage Tribunal from 1975 until 1988, O’Brien chaired or conducted more than 1,300 hearings. Although they welcomed lawyers, most of the time individuals represented themselves and felt comfortable doing so.

“The hearings required a lawyer [me] to make the decisions. You have to apply the law. I was gentle and even though I allowed hearsay as a rule of evidence, I was very reluctant to allow it to be a major part in any way. You can’t cross-examine hearsay,” he says.

The minister of agriculture told O’Brien the Drainage Tribunal relieved the ministry of many problems and even saved it 20 percent of its budget.

“I enjoyed every minute of it and travelled across the province. I had my own airline and that helped very much, and saved a lot of money. I would take the four members of the tribunal to places cheaper than going another route commercially,” says O’Brien.

O’Brien’s nomination to the OAHF was supported by all three of the organizations representing Renfrew County farmers, The Ontario Federation of Agriculture (OFA), the National Farmers’ Union (NFU) and the Christian Farmers’ Federation of Ontario (CFFO).

Gerry Rook of the Renfrew-Lanark chapter of the CFFO said his organization was supportive of the nomination because of O’Brien’s work in dealing with the legal aspects of how drainage disputes were resolved in Ontario.

“He was instrumental in the coordination of the Drainage Tribunal and really upgraded the whole tribunal process, making it less litigious,” says Rook.

Donna Campbell, secretary for the Renfrew County Federation of Agriculture of the OFA, says O’Brien has been so proactive in helping farmers with their drainage issues that acknowledging his contribution in this way was inevitable and she’s glad to see him honored for it.

“If any of us had drainage issues, Del seemed to be the go-to,” says Campbell. “Keeping your land drained helps your crops. If you have wet crops you have nothing, especially if it’s a really rainy season.”

Marshall Buchanan, president of the Renfrew County Local 330, submitted a letter supporting the nomination on behalf of the NFU.

“Del has accomplished a lot of things in his life and he’s got a lot of talent,” says Buchanan. “At a community level it seems to matter if the right person is at the right place at the right time, otherwise things fumble along until the stars align and that happens.” 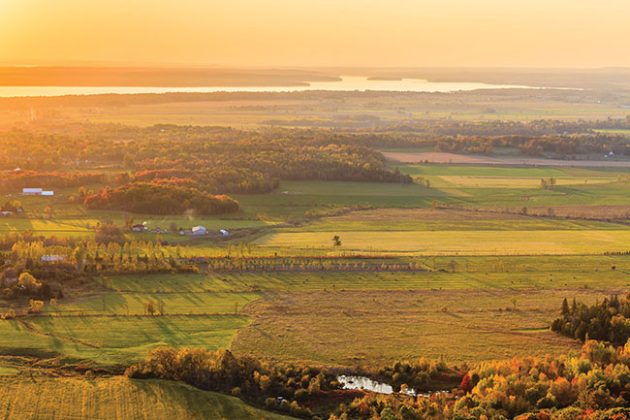 As a longtime resident of the Ottawa Valley, O’Brien believed it was important that hearings take place in local municipalities, not big cities.
Photo credit: © gqxue / Adobe Stock.

Ag expertise
In addition to the Drainage Tribunal, O’Brien was called on many times to assist in provincial agriculture matters, everything from becoming the founding chairman of the Ontario Agriculture Advisory Council to being appointed in 1994 by the NDP government at the time to act as the official Drainage Referee in superior court.

In 1990, O’Brien was tasked by both the federal and provincial governments with setting up a tribunal in the Niagara Region to hear appeals under the newly-created Grape Transition Program. At the time, there was a lot of frustration and difficulty as growers worked to remove traditional grape varieties and plant new modern varieties within a five-year deadline. In an effort to improve industry competitiveness, the government provided grants to assist the growers. Although the transition was both extensive and complex, O’Brien conducted 50 hearings during this time without a single appeal filed.

Committed to agriculture in Ontario, O’Brien has always made a point to speak publicly about rural matters and to promote rural Ontario. He believes there’s a big future in water management because there will always be water runoff and a need for improvements—the technology is getting better all the time.

“I have great admiration for the profession of drainage engineers. They have made a great contribution to society through the improvement of crops,” he says. “I have high regard and high respect for them, and have made a lot of friends.”

Now retired, O’Brien is still a passionate advocate for rural Ontario and the agriculture communities of the province. He says it troubles him to see what he calls a lack of acknowledgement for the contribution the generations of agriculture workers had on making the province a great producer,

But at the same time, O’Brien says he is also encouraged to see more families moving away from cities and back to the country. Although he is retired on paper, he says his current focus is on working to improve infrastructure and help urban planners understand the unique needs of rural areas.

“It’s a great renaissance for rural Ontario and I wish to continue to participate in that exercise with great enjoyment,” he says.