News
Hitting the fields in the pink 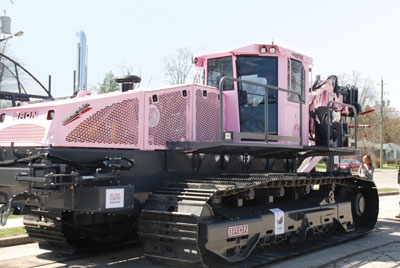 Right from the start For the family

For the family, customers and employees who participated in the barbecue fundraiser held by RWF BRON and Paul Pullins Enterprises, nothing stood out quite like the large, 550 BRON Drainage Plow sitting at the center of the festivities. The event took place Saturday, April 30, 2011, at BRON’s plant in Woodstock, Ontario, and featured the company’s newest machine.

However, it was not the 550 horsepower that caught everyone’s attention; it was the color. When the Pullins family
ordered its newest BRON Drainage Plow, they added one request: paint it pink.

For Paul Pullins and his family, installing agricultural drainage tile is their business and they rely on these massive machines to get the job done. However, Paul’s work, in particular, was never far from his family life either. So when a family friend of Pullins’ was diagnosed with breast cancer, the fight against the disease became personal. The new pink BRON 550 Drainage Plow is one way that the Pullins family believed they could bring awareness to the challenges of battling breast cancer. And it already has.

Paul Pullins Enterprises is based in Quincy, Ohio where the new pink plow will be working regularly. However before shipping it out, RWF BRON wanted to support their customer’s breast cancer awareness campaign by first canvassing their employees and family members, and then holding a fundraising barbecue. More than 250 attended the festive event, enjoying grilled hamburgers and hotdogs and taking their best shot at soaking dunk tank participants.

Deemed a great success, the event raised more than $ 6000, with additional donations still to come. Proceeds were evenly split between the Breast Cancer Society of Canada and the Stephanie Spielman Fund for Breast Cancer Research based at the Ohio State University.

After discovering a lemon-sized lump during a breast self-exam, Stephanie Spielman was diagnosed with breast cancer at the age of 30. She and her husband, Chris, a former NFL player, began to speak publicly about the disease. In November 2009, after 10 years of battling cancer, Stephanie finished fighting but left a legacy that has inspired thousands to continue on.

Since 1999, more than $8.5 million has been raised on Stephanie’s behalf for breast cancer patients and research at the Ohio State University’s Comprehensive Cancer Center, James Cancer Hospital and Solove Research Institute.

Together, RWF BRON and the Pullins family were proud to support the fight against breast cancer. For Paul and his family, they hope their new pink 550 BRON drainage plow serves as a giant reminder that everyone can be part of the cure for breast cancer.

A special thank-you goes out to all drainage contractors that attended and donated to a great cause. The fundraiser promoted awareness of breast cancer as well as farm drainage.