Can drainage make it big in Western Canada? 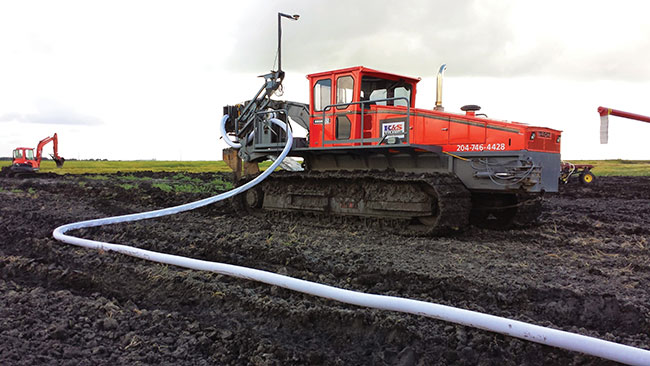 K&S Tiling has been a successful business in Manitobafor more than 20 years. Courtesy of K&S Tiling.

When standing water can be seen as both the hero and the villain in agriculture, there’s bound to be some setbacks along the way when it comes to water management. But seldom will water sit still without purpose.

What’s unique about subsurface or surface drainage in Western Canada is that there’s been an uptick within the past five years surrounding the conversation aspect of the practice – even if subsurface drainage is far from new. With many citing an increased curiosity around the installation of tile, some are already starting to put their money into the practice for the 2021 growing season.

Keith Loewen, president of K&S Tiling located in Altona, MB, says business hasn’t slowed down over his more-than-20 years in the contracting world. Though a pandemic isn’t helpful, he considers himself lucky to get work not only in Manitoba but also parts of Saskatchewan.

Being a contractor always has its challenges, but Loewen points to the amount of red tape in some provinces that slows down the process of getting pipe into the ground. Specifically, there is a Class 3 wetland classification in Manitoba. He explains that if water sits in a spot for more than a month, it adds extra paperwork and money to the process, as an extra permit would be required.

“Permits are always the biggest challenge,” he says. “It all depends on what [the farmer] wants to drain. If they want to drain wetlands you have to get extra permission. Then it’s just the process of knowing and finding out who’s all involved, because I’ve found if it’s just the [rural municipality], it’s not too bad. But then if it’s [Manitoba] Highways or Manitoba Infrastructure, then you have to get two or even three different permits. — I would say that’s the trickiest part.”

Though there isn’t a silver bullet solution, he says there needs to be a way to streamline the process as it’s starting to become more popular and that in his belief, “If it’s the farmer’s field, he or she should be able to do what he or she wants with it.”

Good news: There’s an appetite to learn
Helping curb some of the questions surrounding drainage specifically in Manitoba is Mitch Timmerman, Agri-Ecosystems Specialist for Manitoba Agriculture and Resource Development.

He points to a slight knowledge gap between most parties involved in the process, and says it can be seen as both a good and bad thing.

Oftentimes, local municipal leaders won’t know much about why the farmer wants to install tile drainage. That’s why Timmerman and his colleagues aim to help bridge the gap and ensure people understand “the role of drainage in society and what’s enabled our communities to thrive and our agriculture industry to survive.”

Timmerman looks at water management from all angles, and though there’s some negatives along the way, he says the positives surrounding the viability of agriculture as a whole is what it comes down to.

“There is an appetite to learn, at least amongst some, and if they’re open to learning, then we have been successful and engaging with the municipal council crowd with municipal leaders to provide them [information to help make informed decisions].”

As far as current regulations surrounding the practice, he agrees with Loewen in that it’s a bit of a “tricky dance” to get projects started in a timely manner. But with a little extra time put in, the outcome can be in the farmer’s favor. 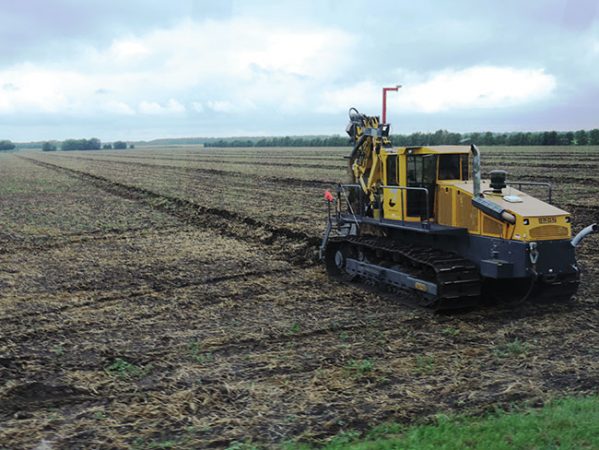 A contractor creates the spacing for tiles to be installed in western Manitoba. Courtesy of Mitchell Timmerman.

Bad news: More research needed on snowpack implications
Working with water comes at a cost. And as mentioned prior, it doesn’t necessarily have to do with the checkbook. Merrin Macrae, a professor in the department of geography and environmental management at the University of Waterloo in Waterloo, ON, is no stranger to that annotation, having worked in the field for the past 15 years.

She understands producers don’t drain the water without purpose. However, she adds, when doing so, it can come at a cost to the environment. There’s always potential for a contractor to deal with wetland conservation, as well as the future of water quality in the area.

Though her research isn’t entirely focused in the West, from what she’s seen, tile drainage is a necessity for crop production especially when it comes to regions with heavy downpour such as the southwestern end of Lake Erie in Ohio.

“It was [like a] black swamp. They drained it so that they could farm it. You could not cultivate that, unless you drained it. So tile drainage in some areas is a necessity for crop production. But the problem is, of course, there are environmental consequences,” she says.

However, as there’s an increase in popularity of tile drainage, she says more research needs to be done when it comes to surface runoff and points to one of her PhD students’ work in the Red River Valley region.

“[Kokulan Vivekananthan and I] looked at whether or not tile drainage was actually going to do anything to impact water quantity and quality,” she says, adding that it’s not necessarily indicative of what’s happening outside of the Red River Valley.

She went on to say, the reason for this is that in snowmelt, a farmer typically has about a foot or more of frozen ground, meaning all of the runoff was on frozen ground and the tiles were essentially disconnected.

“You had a little bit of a trickle through your tiles, but you didn’t get a lot of action through the tile drains themselves. And instead, most of the runoff just went overland and into the ditches and bypass the tiles and so tiles like tiles did nothing to change that. And so because most of the runoff that happened was associated with snowmelt instead of summer storms, it means on an annual basis, your tiles don’t really do very much. Because in the summertime, yes, the tiles will respond. But even still, some of the rain is coming down as big thunderstorms or convective storms and so when that happened on the heavy clays in the Red River Valley, it just went overland anyway before it went into the tile drains. Whereas, if your area had longer, multi-day, gentler rainstorms – those were the types of storms where you actually saw the tiles flowing.”

Macrae adds that a potential plus for tile drainage in the West is to help with the reduction of water in the fields after those spring and summer storms – though she said there still isn’t enough research to fully backup that theory.

At the end of the day, it’s your money
Just like any insurance, your return on investment may not come right away, if at all. Drainage is one of those agricultural practises where the benefits might not be visible in the first year – or second, or even fifth year after installed. The only way to immediately see the benefits is to be able to predict the weather ahead of time. And those in the West know all too well how quickly it can go from cold one day, to a light rainfall the next, to several inches of snow by the weekend.

“It really boils down to a business decision, because by far the majority of land is not tiled. So it’s really the producer that has to make that decision, and (it’s up to them) if the investment is going to have a payback,” says Brian Wilson, an agri-ecosystems specialist and acting manager for the Manitoba Agriculture and Resource Development alongside Timmerman.

“It’s a significant investment on their part. And if it’s not generating a return to them, then, it just doesn’t make sense to do a practice that doesn’t make sense from either an agronomic standpoint or an economic standpoint, and then that’s tied to environment. So anytime you look at a major investment — there has to be that balance of the three as you’re dealing with that method of dealing with the risk of excess water.”