Features Contractor at Work
From South to North

How Tait Bros Contracting has expanded with the family – and with the province’s agriculture industry. 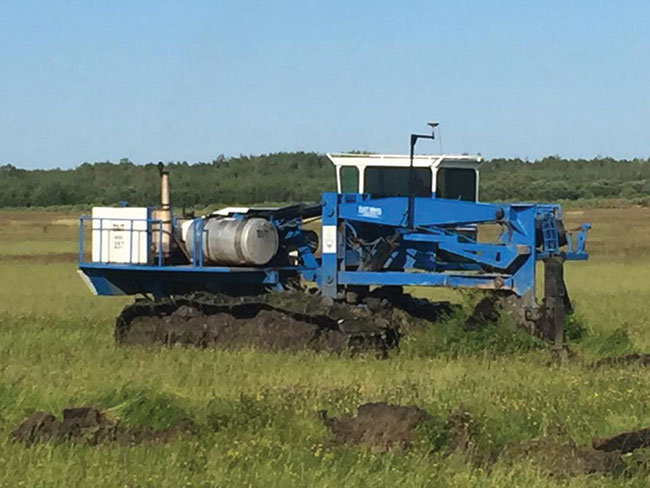 Tait Bros has made its operation more efficient in part by manufacturing their own equipment. All images courtesy of Tait Bros contracting

In 1955, the Tait family began providing field drainage solutions for farmers in southwestern Ontario, near the Grand Valley. “My grandfather James Tait was a farmer here with 15 kids in his family,” says Jim Tait.

“He decided to install tile drains at his own farm after waiting for someone else to do it for a couple of years. After he did it, his neighbors asked him to tile their fields, and so our family drainage business was born.”

“We do all aspects of agricultural farm drainage, but I’d say the bread and butter is field systems work,” says Jesse. “But we do pump stations and ditches as well. Everything is done in-house from surveying and design to installation. We even built our own self-propelled drainage plows to do the installations.” Jesse’s plow is a Tait 257, while Jim drives a Tait 400-7.

Going north
Tait Brothers’ home turf is southwestern Ontario. However, sales opportunities motivated the company to start offering tile drainage to farmers in northern Ontario in the early 90s. They started out in the Thunder Bay and Algoma districts, then shifted their focus to the Rainy River district, at the border between Ontario and Minnesota.

According to Jesse, high real estate values in southern Ontario have fuelled the farming boom in the north. “More farmers are buying more land here as the price of land in the south keeps going up,” he says. “People have also found they can grow pretty good crops up here with the right methods, field preparation, crop varieties and longer hours of sunlight. So, the North is really starting to boom. There is a lot of ground being reclaimed and utilized for farming now.”

The demand for tile drainage is so strong in northern Ontario that Jesse now spends three seasons here each year while his father Jim handles business in southwestern Ontario. He started doing that back in 2012 when up until that point, his grandfather John had been covering the north.

“I was actually ranching in Quebec at that time, but they needed some help,” says Jesse. “So, I came up in 2012 and started working. Then in 2013, the Northern Ontario Heritage Fund Corporation (NOHFC) started providing money to farmers here, and that’s when tiling really took off in the Rainy River district.”

In 2017, John Tait passed away. When this happened, “I decided that I wanted to jump into the ring,” says Jesse. “So, me and my dad formed a new company, but we still called it [Tait Bros]. We wanted the legacy of the company my grandfather founded to live on.”

Jim and Jesse Tait keep the business – and the equipment – a family affair.

Good help is hard to find
These days, Tait Bros is busy at both ends of the province. While work has been steady, Jesse says they could do far more if they could find the help.

But these days good help is hard to find – and labor slowdowns caused by the COVID-19 pandemic have only made matters worse.

“One of the challenges up here in finding workers is that there are lots of well-paying jobs in mining and forestry,” says Jesse.

“So, a lot of the people who want to do this kind of work already have jobs in those sectors,” adds Jim. “Meanwhile, oftentimes the kind of people who you need to hire are pretty good entrepreneurs by nature, which means they are able to do jobs like this on their own. The result is that everybody’s working from the same small pool of labor for this kind of work.”

“As far as employees go, I think it’s safe to say everyone is in the same boat,” Jesse echoes. “Nobody has enough good guys. Down south, Jim does have a great employee who’s been with us for years. And he usually finds help when he needs it, but some guys only like shop work or field work, so it can be a struggle to find someone to do both. Over the past years in the north, I can sometimes get some part-time help, but I am always looking for guys.”

Given the Taits’ abilities to build everything they need, including drainage plows, it makes sense for them to design a mechanical solution to the labor shortage. “Right now, we are building carts that you pull beside the drainage plow to help with some of the jobs, so that you don’t have to have an operator on the stringer,” says Jim. Our goal here is to reduce the number of hours it takes to lay drainage tile, because it can end up being a pretty long day when you’re doing it yourself.”

Looking to the future
Despite the challenges of finding good help, Jim and Jesse Tait are determined to keep growing their business, particularly in northern Ontario. “We are currently in the process of receiving an NOHFC grant for business expansion in the north,” says Jesse. “As I said earlier, the farming market up here is booming, and people want tile drainage to make their fields more productive.”

In the meantime, the topic of bringing a fifth generation of Taits into the business is already on the table. “I have a son, but he’s just 11 now, so it’s too early to say,” notes Jesse. “But it would make sense for him to spend at least some time doing tile drainage work, since John Tait’s grandsons have all worked in the business – even though most of them have moved on to do other things. It would be nice if somebody wanted to keep Tait Brothers going, but my son’s a little too young to be thinking about it yet.”

“Meanwhile, my dad Jim will be a lifer one way or the other,” he laughs. “We always joke that when one of the Taits dies, we just put him in the last joint hole and move on to the next one because we can’t miss a day of work!”

“I don’t know if I can quit, but I’m going to certainly try,” says Jim. “But you know, I think I’ve barely scratched the surface on tile drainage. I mean I’ve done a lot, but there’s a long way to go yet. And man, I’ve loved the ride that it’s taken me on. So, I don’t think I’m going to quit just yet.” DC