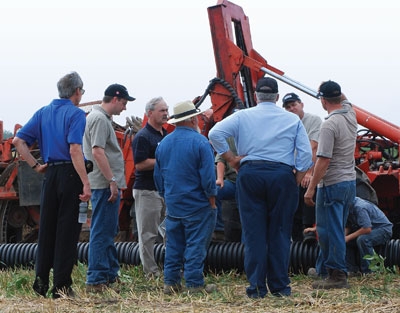 It may have taken place in 2010, but the grand opening of a tile manufacturing plant was a newsworthy event because it served to bring together 17 companies for an open house and tiling demonstration. Hancor/Advanced Drainage Systems opened its plant near the town of Heidelberg, northwest of Kitchener, Ontario, with a tiling demonstration and field day down the road at the farm of Oscar Wideman. Among those exhibitinag on site were the Land Improvement Contractors of Ontario, A&E Farm Drainage, Wolfe Equipment, Agri Drain Corp., Advanced Geo Positioning Solutions and Geo Shack Canada. Contractors from across Ontario attended the event, with some commenting that it was the first such gathering in at least 10 years, maybe longer.

But it was well worth the wait, as those attending were treated to working in-field demonstrations, including some newer, advanced designs in trenchers, as well as a series of guided tours through the Hancor/ADS plant. The tours gave some in-depth perspectives on manufacturing and specifications of the single and dual-wall corrugated HDPE pipe that is the industry standard.