An air base drainage project called for quick installation. 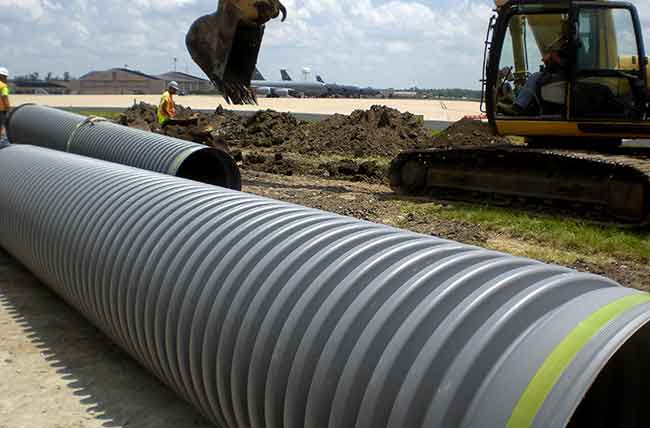 The drainage system along the primary runway at Scott Air Force Base in St. Clair County, IL, was originally clay pipe and perforated corrugated metal pipe. After 50 years, much of the pipe was either leaking severely or had deteriorated to the critical point where replacement was required. Plans called for nearly six miles of large-diameter pipe to be installed, but it had to be done within a strict timeframe, because the runway could be shut down for only a specific time period.

This project included removal and replacement of more than 31,000 linear feet of 12- to 36-inch diameter pipe. After being awarded to the contractor, a value engineering proposal was approved to use corrugated polypropylene pipe in accordance with ASTM standards F2736, F2881 and the American Association of State Highway and Transportation Officials (AASHTO) M330 specifications. The high pipe stiffness and watertight joints of the pipe system allowed for a reduced amount of imported backfill and the subsequent reduced haul off of excavated material. Burial depth would be up to 13 feet.

The selected pipe was a polypropylene pipe for gravity-flow storm drainage applications from Advanced Drainage Systems, Inc. This polypropylene pipe is approved for use by the Army Corps of Engineers for storm drainage applications under Section 33 40 00 of the Unified Facilities Guide Specifications. The pipe’s joint meets or exceeds the 10.8 psi laboratory performance standards, per ASTM D3212 requirements.

The Federal Aviation Administration (FAA) has approved polypropylene pipe for subsurface water collection and disposal at civilian airports. “The decision to recognize polypropylene pipe as an equal alternative to other materials enables design engineers and contractors to leverage the benefits of this lightweight, cost-effective and durable solution for water collection and removal under airfield pavements,” Currence says.

Located 20 miles east of St. Louis, Scott AFB is a global mobility and transportation hub for the Department of Defense (DoD). The 3,589 acre base is home to several command and control elements that represent logistics for the United States military in an environment that brings together the Army, Navy, Air Force, Marines and Coast Guard members – active duty, Guard and Reserve. They are responsible for managing the global mobility missions around the world and also aeromedical evacuation, senior leader airlift and aerial refueling capabilities for the Air Force and DoD. The base has more than 22,000 uniformed, civilian and family personnel.

The Scott Air Force Base in St. Clair County

This isn’t the first time the base has placed a tight deadline on contractors. According to the base’s history, when it was built in 1917, the government gave the Unit Construction Company 60 days to erect approximately 60 buildings, lay a mile-long railroad spur, and level off an airfield with a 1,600 foot landing circle.

Contractors once again faced pressure to comply with a demanding project end date on the new stormwater pipeline. It had to be completed within the 16 weeks that the runway was to be shut down during the summer of 2014. The pipe’s lightweight, 20-foot length, the ability to nest different diameters of the pipe and ease of handling allowed each of the contractor’s two crews to install more than 400 linear feet a day on many days. This enabled the pipeline to be completed within the allotted time.

“Each day they were easily able to string out the pipe along the trench alignment and move as quickly as the excavator could remove the old pipes,” Currance says. “Often, the crew could insert the pipe in the trench without the need of heavy equipment. The value engineering proposal saved more than $30,000 while providing a sanitary-sewer grade polymer, pipe stiffness and joint. The combination of the high performance joint and durability associated with the corrugated plastic pipe will make this construction a permanent solution to drainage at the base.”

“This project represents all of the many significant advantages that corrugated plastic pipe provides,” says Tony Radoszewski, president of the PPI. “It offered a lower-cost installation, very rapid construction, consistent and high-quality buried pipe performance and long-term joint performance. As the need to replace aging infrastructure continues to grow, this project demonstrates how innovation can not only reduce the cost of construction but insure a permanent drainage solution.”