Features Business
Eye in the sky

UAVs can reveal what’s up down below. 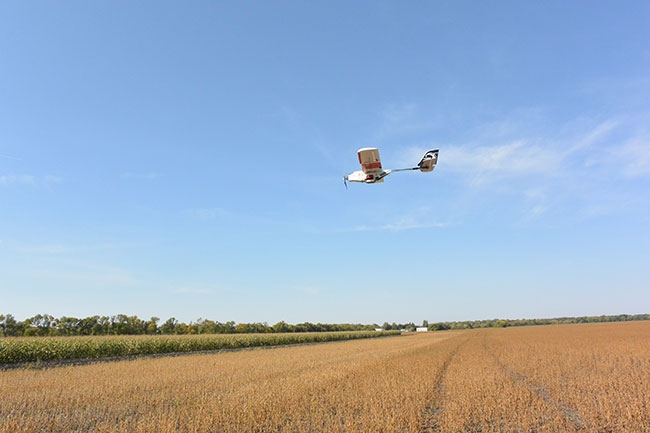 Unmanned aerial vehicles (UAVs) are generating a lot of buzz in the agriculture sector lately. The rapidly evolving technology is giving farmers the ability to understand what’s happening in their fields like never before, and new rules coming down the pipeline on both sides of the border have the potential to open up new opportunities to put these powerful machines to work. Drainage contractors too stand to benefit from adopting UAV technology into their operations.

There are two types of UAVs: a fixed-wing model that flies like a miniature airplane, and a rotor model that can hover in place like a miniature helicopter. Both models can be kitted out with cameras and sensors to deliver a bird’s-eye view of a farm, providing a snapshot of field conditions. To capture this data, the UAV flies multiple passes overhead, constantly snapping pictures to ensure complete coverage of the survey area. These pictures are then stitched together and can be imported into geographic information system (GIS) or computer-assisted design (CAD) software, allowing the user to study the aerial images and pinpoint areas that require closer inspection by a trained human eye to diagnose what’s at the root of any trouble spots.

“The bird’s eye view lets you get the holistic view of the field, and that’s a big help. You can see very clearly the differences in the field based on drainage, evaporation rates and things like that, particularly surveying after a rainstorm. It gives contractors a view of the field that they can’t really get any other way,” says Ernest Earon, founder of PrecisionHawk.

The company, with headquarters in Raleigh, N.C., and satellite offices across the United States, Canada, the United Kingdom, Australia and India, provides a complete system for aerial surveying. It’s designed to be user-friendly: simply throw the UAV into the air and it will fly multiple transects over a pre-programmed area to collect a complete survey of the field. PrecisionHawk’s UAV can fly in rain, snow and wind up to 40 to 45 km/hour. Above this threshold, the wind can compromise the efficiency of the survey. If the machine, which monitors flight conditions in real-time, determines wind speeds are too high, it will turn around and land so the survey can be attempted at a later time, under more favourable conditions.

The UAV can capture data on up to 500 acres in a single flight; a survey of this size can take up to an hour to complete. Users have access to a first look at the data within minutes of completing the survey. PrecisionHawk also turns the complete survey data package around quickly.

“Depending on the size and the intensity of the survey, we can have a completely processed photomosaic in your email inbox within an hour,” Earon says. “For a very data intensive survey it might take several hours, but the idea is to get the information turned around as fast as we can.”

Drainage applications
HighEye Aerial Imaging, located in Wasaga Beach, Ont., specializes in aerial imaging services, capturing high definition photography and videography at low altitude with its fixed-wing and multi-rotor machines. Both types of UAVs feature on-board sensors that record and automatically transmit data to the ground in real-time. Although HighEye hasn’t yet flown any surveys strictly for drainage purposes, president Murray Hunt sees many opportunities for contractors to use UAVs in their operations.

“The biggest thing I see for the drainage contractors is that it saves time. In the design stage and in the pre-layout surveying, you can get the topography of the property,” Hunt says. “Through processing, we can provide detailed elevation data and generate contour maps… We can export the data into the CAD program so you can take the geographic information and convert it into a file that someone could load onto their software and do a final drainage design.”

As Hunt explains, latitude, longitude and elevation data is all embedded in the software. “This way, not only do you get all the geographic information, but you actually have an image and you can plop that on the aerial image of the property that you’re looking at.”

Imaging technology can spot differences from one section of field to the next, but it can’t yet distinguish a drainage issue from a disease issue. “If you’re looking at drainage and soil content, at moisture content in the soil, we don’t at the moment have any tools that can tell you exactly what the moisture content is in the soil or what the water level is and things like that,” Earon explains. The technology allows users to zero in on areas that require a closer look; it’s up to the user to get out in the field and identify the root cause of any trouble spots the survey reveals.

UAVs can also be a useful tool in helping contractors pinpoint the precise location of any existing drain tile in a field. “You can’t actually sense the tile, but you can sense all the symptoms in the crop above it, whether it’s nutrient deficiency they’re finding with an infrared camera or a multi-spectral camera or just locating drain tile the day after it rains,” explains Todd Golly, co-founder of Leading Edge Technologies in Winnebago, Minn., and himself a drainage contractor. “That’s one of our things that we do most actually: locate old tile.”

Upgrades that dig deeper
As UAV technology and its applications evolve, existing equipment is being adapted to give operators new insights into what’s happening on the ground. For example, PrecisionHawk’s UAV system can be equipped with a thermal camera that allows users to capture information about standing water on a field and evaporation rates in the soil.

“If you’re using the thermal cameras and looking at soil temperature, you can tell if you’re getting much higher evaporation rates with cooler soil early in the morning,” Earon explains. “That’s not necessarily saying it’s oversaturated and you have a drainage problem, but if you get a patch of field where you clearly have more water or faster evaporation rates, you would see that in the thermal image. It would look cooler and then you would want to go out and find out why.”

Leading Edge Technologies is also adapting new technology to its operations. The company now offers an optional multi-spectral camera attachment for its UAVs. The MultiSpec 4C unit contains four 1.2 megapixel sensors that collect data about the wavelengths of light being absorbed by a crop. Healthy plants reflect and absorb various wavelengths of light in different quantities than plants experiencing stress. So, by capturing data about how a crop is using light in the green, red, red-edge and near infrared (NIR) wavelengths, a multi-spectral camera can identify variances in crop health. These differences aren’t necessarily visible to the human eye, nor at ground level, but when seen from the sky, patterns can become apparent. The overhead, whole of field view can allow drainage professionals to pick out patterns of lines running through the crop that may indicate plants are growing along the path of existing tile.

Technology is continuing to drive innovation, and new tools to help agriculture professionals do their jobs more effectively are just around the corner. In the coming months, PrecisionHawk hopes to introduce a new ground penetrating radar sensor capable of providing information about soil content, moisture content, and the depth of the water table. Earon expects the company will be flying prototypes of this sensor by mid-summer.

A question of cost
The price tag on a UAV can run from a few hundred dollars for a hobbyist craft, up to thousands of dollars for a commercial grade unit. Factor in software and the costs of investing in a complete system can add up quickly.

“You’re going to be in that range of $25,000 for the UAV and complete software package that can create these three-dimensional surveys with topography,” Golly says. “That software will also be able to export to other drainage programs. If you want to add different sensors, there will be additional costs on top of that.”

“The other option is an RTK [real time kinematic] version that will give you a bit more accurate topography,” Golly adds. “You won’t be able to fly the thermal camera and the multi-spec camera because they’re not compatible, but if you want the greatest accuracy – sub-inch accuracy – on topography, you could upgrade to an RTK system, which is in the $50,000 range.” However, Golly, who says farming remains his main job, adds, “We don’t use the RTK version for surveying; it’s mainly for planting.”

Golly recommends drainage professionals on the market for a UAV start with the base unit and build on to the bird with additional sensors as needed.

Another option to leverage the power of UAVs in your business without taking on the cost of operating your own system is to contract a professional firm to fly surveys on an as-needed basis.

Surveying the legal landscape
Both the Federal Aviation Administration (FAA) and Transport Canada (TC) are working toward new regulations governing UAV use that balance creating an operator-friendly environment with ensuring public safety, and reflect the realities of the technology. Although it may still be a while yet before either body has a full set of final rules in place, if they remain true to the proposals currently on the table, the changes could usher in a new era of UAV use in agriculture.

The FAA’s proposed rules for UAV use were announced in February. As they stand now, the new rules would require operators to comply with a certification process that includes an exam. Operators would also have to register and maintain the aircraft, and adhere to limitations on the UAV’s operation. Some of these limitations include: the UAV must not exceed a maximum weight of 55 pounds (25 kg); the operator must maintain visual line-of-sight with the UAV at all times; and the UAV may not fly above a maximum altitude of 500 feet above ground level.

“We think it’s a very common sense, practical set of operational guidelines, and we’re very pleased to see things moving forward from a regulatory standpoint,” Earon says. “The environment is finally getting to the point where people can make the decision [to invest in a UAV] and know that they’re going to be able to go out there and fly.”

TC is also working toward streamlining its regulations for UAV operations. In November 2014, the department introduced two exemptions to make it easier for small UAV operators to fly: a Special Flight Operations Certificate (SFOC) is no longer required for certain operations using a UAV weighing less than 2kg, or, with prior authorization from Transport Canada, a UAV weighing less than 25 kg. For these exemptions to apply, the operator must keep the UAV within visual line-of-sight, and fly at or below 300 feet above ground level, among other limitations.

“They’ve really made it very feasible for individuals to be operating these systems over their farm fields,” Earon says.

Hunt, an active member of the non-profit Unmanned Systems Canada, which represents the interests of the country’s unmanned vehicle systems community, says the association is working with TC to further streamline the regulations.

“Agriculture is a huge and incredibly data-hungry space. They need answers and they need information to guide their decision-making process, so there’s a lot of attention being focused on making tools to support that,” Earon says. “Stay tuned because we have a lot of very interesting things coming.”