Salts and minerals are parameters that must be considered.

Installation of agricultural subsurface drainage tile in the Mexicali Irrigation District (MID), Baja California, Mexico, began in 1971 with the installation on 100 acres. Later, in 1991, the University of Baja California (UABC) installed five in its experimental field located in the ejido (communal) Nuevo León, and another 45 in the year 1995. During the spring of 1998 in a pilot program, the state government of Baja California gave funds to farmers to install tile in four fields with a total area of 145 acres, to 2010, where there are now about 14,000 acres with tile.

This made it necessary to develop a field evaluation in the year 2008 with the objective to review the impact that have such systems in soils and agricultural production, as well as the current conditions of these systems.

Introduction
The MID is located in Mexicali, Baja California, Mexico, and receives water from the Colorado River. This district is on border with the state of California, and particularly with the Imperial Valley Irrigation District (IID). This is an arid zone with 513,698 acres in production. In summer, the temperatures can reach 123 degrees F and lows of 21 degrees F, with an annual precipitation of 15 inches and evaporation of around 95 inches per year. These characteristics mark the conditions of an arid area, plus the poor drainage and salinity concentration of the irrigation water of 1200 parts per million (ppm) represent a challenge to maintain adequate soil conditions.

At this moment the tile installation is focused to reclamation of land with shallow water tables and progressive soil salinization, and due to this, it is necessary to conduct an evaluation of existing drainage systems to verify their impact on the crop production and the physical-chemical status of soils in a complementary way.

The objectives that had been raised were:

Field work
Field tours were carried out in holdings with subsurface agricultural drainage projects installed in the District of Irrigation 014, along the Colorado River, for organization and processing into a data base using GIS, whereby information was collected.

Soil profile was developed in Field 36 in the ejido (communal land of) Oaxaca, where it had four layers differentiated by color. The first horizon was observed loose and dry, but deeper soil aggregates were more defined and generally have greater resistance to the degree of deformation, as noted in the description of horizons is presented below (Figure 2). 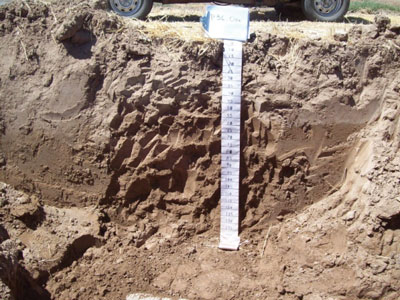 Agronomic evaluation allows us to determine qualitatively if spacing between lateral tiles is working based on the design, which notes the development of cultivation. If in the middle of two laterals, the plant size is smaller than the size of the plants on top of it, then we can infer the separation between drains is incorrect. Seventy-two fields were agronomically evaluated and 59 (82 percent) were working very well; in recovery process were 11 of the fields (15 percent) (Figure 3).

Subsurface drainage systems analysis
Sedimentation was found in some drainage systems; up to 75 percent of pipe capacity, specifically in soils that have much silt and fine sand. There were root problems in 10 fields, specifically when the open ditch had weeds and bushes in the area were close to the collector discharge.

Abrasive deposits of iron (Fe) and manganese (Mn) of one millimeter thick were found both in laterals in the middle of the field and on the main collector. In a total of 172 fields evaluated, five had these problems (Figure 4). 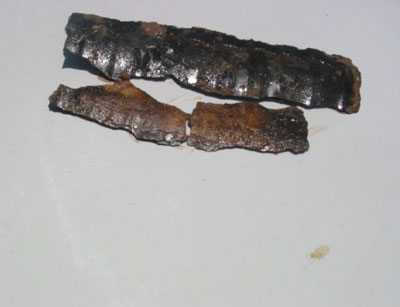 As stated previously, of 72 fields evaluated, 82 percent were working very well, with 15 percent in the recovery process. The design of geotextile filters was based on the grading curve and a recommended 400-micron size, and systems to a depth of 46 inches for the filter (3.83 feet) on average. The pipe in some cases had up to 75 percent sedimentation, including iron and manganese sediments, and an invasion of roots, so it is recommended to perform maintenance on these systems. Sedimentation in drainage systems was present in soils with silt or fine sand, and in loamy-clay or clay soils.

Added conclusion
Following an analysis of the field information generated, we have the followings conclusions:
The maximum water flow in the outlet collector was 158.5 gallons per minute (gpm) and the minimum of 2.9 gpm of salt that is extracted under these conditions is equivalent to 7.38 tons per day and 0.02 tons per day, respectively.

Recognitions
To do this work we had the participation of Rodolfo Namuche, the Mexican Institute of Water Technology (IMTA), the National Water Commission (CONAGUA) and the State Government of Baja California, México.

*Carlos R. Orozco-Riezgo is a soil and drainage consultant, and is working on his PhD in subsurface drainage. He is based in Mexicali, Baja California, Mexico.