Features Contractor at Work
Decades in the ditch

Reflecting on the rise of the drainage industry. 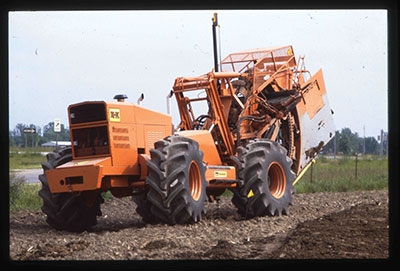 The Buckeye Super H was introduced in about 1983 Water

Water, we’re told, is one of the few things we cannot live without. But apart from the human body’s constitution and water’s importance to sustaining life, to most people, that’s the end of the discussion.

For me, however, it has meant much more. There’s a fascination about water that has been part of my life since I was a small boy. I’d often play in the stream, damming it up, watching the water overflow and eroding the dam. Then there was the curiosity of poking into the tile to watch the orange-colored water falling into the ditch and seeing workers clearing ditch bottoms, then laying tile and covering them with straw – the traditional way of “blinding the ditch.”

Becoming the editor of a magazine that dealt with water moving down grade was a natural fit. I had graduated in mechanical engineering in the United Kingdom and worked for a while in diesel engineering. I ventured to the United States to work with Laserplane, and later moved to Canada and hitched my ride to drainage forever.

In 1974, lasers were leading edge technology and they had begun to revolutionize the farm drainage industry. North American agriculture was still in the throes of massive increases in production capacity of growing corn; new hybrid seed, commercial fertilizer and weed control chemicals were pushing the farmers’ production to the point that they were limited by the capacity of the soil and its moisture holding abilities. Farm machinery was getting bigger and tillage methods were becoming more intense. This led to new problems: soil compaction and soil erosion were lending their own pressures on farm production capacities. Progressive farmers realized that the most significant limiting factor was tile drainage in their fields. So a boom in drainage began, but it was stifled initially by a lack of capacity for clay and concrete tile production and installation techniques to keep up with demand. At this point, most clay tile was still being laid out alongside the trench and put into place in the trench bottom by hand.

The rotating laser was part of a three-part solution. Combined with the introduction of corrugated plastic drainage pipe in the late 1960s, and faster installation capabilities of chain trenchers and trenchless drainage plows in the early 1970s, a surge of enormous proportions was underway. Between 1967 and 1977, the production and installation of drainage pipe in North American fields – mostly the Midwestern United States, plus southern Ontario and Quebec – went through a boom period.

The stories of success in the 1970s are almost legendary. Some contractors at industry meetings vied for the rights of ownership for the trophy of who had installed the most tile in a day or a year. In the back of the room, there would always be another who had a different opinion, or a quiet fellow who was content to count the revenue. Not every contractor jumped into the new wave immediately, but most did eventually. In fact, there was an impact on the traditional North American machinery manufacturers, which were mostly producing wheel trenchers based on Buckeye’s design from the turn of the 20th century. They knew they had to increase the production and output of their machines to compete with the newcomers: Speicher, Buckeye and the then formative Port Industries with its Hydra-Tandem began a 25-year (or longer) campaign to design and produce ever larger and more powerful trenchers.

Who were these newcomers? Hoes and Eberhardt from Germany, and Barth, Draiente, Drainmaster and Hollanddrain from the Netherlands brought the major introductions of chain trenchers in the early and mid-1970s. By late in the 1970s, Hoes of America reportedly sold more than 100 machines into the U.S. Midwest in one year. In Europe, new breeds were spawned: Mastenbroek in the United Kingdom and Inter-Drain (initially in the United Kingdom, then in the Netherlands) set up their new manufacturing operations. Older names either faded out or trended to the construction industry, like Vermeer, Ditchwitch, Cleveland, Barber Green, Parsons in the United States, and Howard, Caley and others in the U.K. Some made the trans-Atlantic journey and others, like the U.K.’s Bruff, which produced one of the world’s first self-propelled drainage plows, stayed home. Most of the European makes sold many machines for use on Middle-Eastern projects.

Drainage plows, while originally developed in the U.K. as installation tools, became widely popular in the mid to late 1970s. In some regions of the United States, they were poorly operated and left an unfavorable image that was to take more than 20 years to overcome. In other areas, they quickly became the norm and we soon saw contractors scaling up to operate several plow crews. The first commercial plow seen in North America was Badger’s roller linkage plow, introduced by Daymond, a pipe manufacturer in Ontario. Then, Canadian companies such as Zor, Eddy Oxford (Link Plow), Krac, Canteco (Wedge) and RWF followed with double link plows. Tait began producing its heavy-duty self-propelled plow. Self-propelled plows with various linkage designs were first introduced by Hoes, Draiente and Barth. Most of the linkage plows followed basic design concepts formed by Dr. Ainsley Ede in the United Kingdom and Dr. Jim Fouss at the Agricultural Research Service of the United States Department of Agriculture at Columbus, Ohio, in the 1960s, while Barth and Draiente followed mechanisms borrowed from shallow angle chain trenchers.

Interestingly, during the massive 1970s expansion in the industry, there was not a great deal of animosity shown towards those who advanced and adopted new technology early. Most of these contractors willingly shared their experiences and helped later adopters to learn the technology and how to become more productive. Drainage Contractor magazine itself held workshops in Indianapolis in 1978 and 1979 that promoted these ideas as well as business management methods.

Information transfer was also happening from the drainage research community during this period, and the proceeds of that work are still being used today. University- and government-sponsored research and extension bodies were disseminating the benefits of drainage, while new research tackled things like plastic pipe integrity in manufacturing and installation, how to reduce or avoid installation problems like pipe stretch, trench-wall smear and pipe collapse after installation. Open discussion of these topics led to innovations, most often by contractors themselves, of tools and methods that have become universal, like power feeders and, more recently, automatic crushers and shears to chop the end of the pipe before installation.

Informally in most regions of the world, but directed only in Ontario through a licensing program, installation quality has been a priority of most drainage organizations and associations. It is a testament to this that so many millions of feet, meters or miles of drainage tile has been installed over the past 40 years and is still functioning to improve food production output from farms.

By the 1990s, the industry had settled into something of a lull before a new wave hit, thanks to global positioning satellite (GPS) technology. It did not hit the drainage industry directly as the laser had 30 years before, but obliquely. Farmers were checking their GPS-based yield maps and discovered they needed more drain tile and in more intensive systems. Once more, the installation side of the industry could not keep up with demand, and farmers started to take the work on themselves, using the so-called pull-behind plow.

Now, many years later, many contractors have upgraded their machinery capacity to meet demand and GPS-based grade control and guidance systems have become widespread. Meanwhile, many farmers have parked their DIY machines because they found the work was more complex and time-consuming than they had thought – but some have become today’s contractors, a great boost for the industry.

Current research in drainage is still delivering ideas, with concepts of denitrification and controlled drainage. It’s impressive to see how contractors can continue to fine-tune their field operations to squeeze the extra money out of more efficient machinery. Now that GPS technology and on-the-go computerized installation design has become the norm, it’s hard to predict what will happen in the next 40 years.

Peter Darbishire was the editor of Drainage Contractor from 1978 to 2008.
Print this page