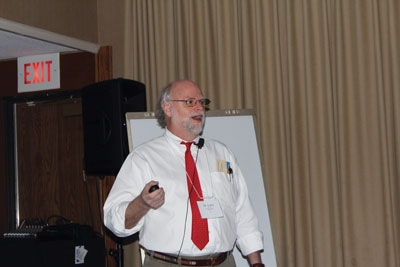 On Jan. 19 a large and interested group heard Larry Brown of Ohio State University discuss “Drainage Water Management for Water Quality and Crop Yield” at the Land Improvement Contractors of Ontario conference in London, Ont. Brown sought to stimulate some new thinking about drainage strategies by presenting photos and discussion of several farms he has toured as part of his work with academic groups from several colleges.

Brown started by laying out the problem he and his fellow academicians are seeking to alleviate: worrying levels of nitrates and phosphates that are draining into major water systems from cropland and causing drops in water quality and deadly algae blooms. He noted that agriculture was a major source of nitrates, but not the only source, and that the problem stems mainly from the Midwestern U.S. farm belt and subsurface drainage. Runoff from agricultural lands is causing problems in the Gulf of Mexico and the Great Lakes.

In a nutshell, Brown described the solution as better management of drainage, shallower drains, bioreactors, and more use of wetlands as filters for nitrates. He pointed to the NRCS standards 554 and 587 for controlling drainage from a field and noted that of the three kinds of drainage – conventional, controlled and subirrigation – he would primarily be discussing controlled. While controlled drainage has been around since the 1950s to control subsidence on organic soils, groups like Brown’s from across the Cornbelt have met resistance since they started promoting it as a general drainage tool in the 1990s. Contrary to the fears of many landowners, Brown says his studies have found that nitrate concentrations in soil do not fall measurably with controlled drainage whereas water outflows decrease dramatically. He admitted that we do not fully understand where the water and nitrates go. Scientists speculate that because controlled drainage leaves the water table higher, nitrogen may get reintroduced into the soil after the surface water is drained off.

His group has measured up to a 50 percent reduction in nitrogen loads in corn and soybeans in controlled drainage operations with subsurface flow reduced by a similar amount. The group does not yet have enough research to say definitively if controlled drainage will increase crop yields.

Brown said concerns about using controlled drainage in the winter are mostly due to misunderstandings about the technology. Blocking drains is not an aspect of a controlled drainage management system; instead, the group is adjusting the outlet “elevation” at which water can leave the field. Local practices would have to be adapted to regional climate variations, but he said that controlled drainage has been demonstrated to work as far north as Minnesota and as far south as North Carolina and Louisiana. The practice involves installing water table control structures at drainage outlets.

Brown showed an example from a farm that had been converted from beef production to grains. The new drainage system used an existing wetland to take the overflow, and this excess water was used in a lower portion of the field that was under controlled drainage. He pointed out that controlled systems can be retrofitted onto existing drains. Brown said it was true that controlled drainage was not the perfect solution in all situations, but that systems should be designed for the particular cropping system and soils the farmer manages.

Brown then moved on to offer some general guidelines for controlled drainage systems. He said the best results are achieved when the water table control structure is installed on solid ground without gravel. Contractors should use an anti-seep collar and hand backfill around the structure after retrofitting. He said it is important to use the manufacturer’s recommended fittings, pipe and watertight joints, and use non-perforated pipe on either side of the structure for a distance of about 20 feet, or half the drain spacing.

For good system management, Brown recommends adjusting the outlet elevation in the fall and reducing the drainage outflow until early spring the next year. The outlet elevation should be adjusted again after planting, and unless there is rainfall, allow the crop to slowly lower the water table.

Brown faced a number of skeptical questions from the Canadian audience about how such a system would work in the harsh winters. He allowed that more demonstration in northern climates was probably needed.