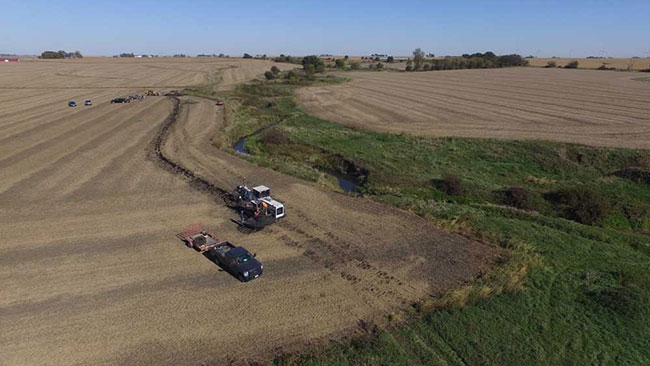 A saturated buffer installation requires at least one meter of relief between the field and the buffer. There was enough room When nitrogen escapes from fields and buffer strips into watershed systems

When nitrogen escapes from fields and buffer strips into watershed systems, it’s costly for everyone. New research suggests the installation of saturated buffer strips could offer a viable solution with economic merit for preventing these nitrogen losses.

Tim Recker is a farmer from Arlington, IA who also owns and operates Recker Excavating Inc. The excavating company has been assisting Dan Jaynes of the U.S. Department of Agriculture’s Agricultural Research Service (USDA-ARS) with his research on saturated buffer strips. After the successful installation of his first saturated buffer last year in August, Recker is enthusiastic about the ease of installation and the broad appeal they offer to landowners facing growing scrutiny over water quality.

“What farmer doesn’t want to keep the expensive nutrients that he puts on his own ground and not send them down the river?” Recker says.

Learning from Jaynes about how saturated buffers work has taught Recker that although the concept doesn’t apply everywhere, pretty much any location with a buffer strip may be a candidate for saturated buffer installation.

Jaynes explains that saturated buffers do require an existing riparian buffer, or that there will soon be a new buffer installed adjacent to a stream, pond, or ditch.

A proper installation will include roughly three feet of relief between the buffer and the field that’s draining into it, although Jaynes admits this can eliminate some potential sites that lack the additional space.

“We’re going to intercept the tile outlet within the buffer, put in a control box, and then use that to raise the water table within that outlet,” he explains. “Then we put in a new distribution pipe, just some perforated tile, which runs along the field edge of the buffer.”

“If we have about a meter of relief, we can raise that water table in the buffer and we don’t impact the farmer’s drainage system at all,” he says, “and that’s what’s ideal, because once we put this in, the farmer doesn’t have to do anything, just go out once a year and make sure that no junk has filled the box. I think it is a real benefit for this practice.”

Jaynes says that the practice is most suited to soils with a lot of carbon in them, because it’s the carbon that is stimulating denitrification of the water while it seeps through the saturated buffer. Locations where the soil is very dark near waterways, (which is very typical in Iowa or Minnesota) needs to test positive for more than one percent carbon, as deep as three-or-four feet into the soil profile.

He also explains that it’s helpful when the buffer is lower than the field landscape, otherwise the rest of the tile drainage system will be impeded by artificially raising the water table with the control box. The last thing to consider is how far the new distribution tile can be run through the buffer.

A saturated buffer installation requires at least one meter of relief between the field and the buffer. There was enough room

“The longer you can extend that, the more nitrate you can remove,” he says. “And, typically, we run up against a property line we can’t go across.”

Jaynes says that in cases like this, start at zero grade and get shallower as you go downstream, or deeper as you go upstream. “Just don’t go any deeper than four feet or more than a foot-and-a-half as you’re getting shallower.”

These are the best guidelines he can offer based on what the research shows so far. But Jayne says in observing more than 10 sites so far, these installations offer a lot of variable control.

“We measure what the nitrate concentration is in the outlet, and ideally if things are working properly, what we see is decreasing nitrate concentration as we go through our distribution pipe into the stream,” he explains. “In some buffers, it happens quickly within the first 10 feet or so, and all the nitrate is gone. In some of the others, you use that entire width of the buffer and you still don’t get removal of all the nitrate, but it does reduce it some.”

Recker says in his buffer, Jaynes has been able to track 100 percent elimination of nitrogen between the tile outlet and the water leaving the buffer. He knows that isn’t always going to be the case, but he’s pretty excited to see those results are achievable on his farm.

“I’ve done both the bioreactor with woodchips and I’ve installed three saturated buffers now,” he says. “The saturated buffer is a third of the cost, the time to install it is so much quicker, and the research shows that we’re getting better nitrogen removal.”

Typically, full installation takes about half-a-day and most of that time will be spent finding the outlet in the buffer if it’s not obvious. Once the new control box is in place, laying the new distribution pipe takes only a matter of minutes. Recker says that as farmers push for earlier planting seasons and work later into the fall, tiling work, which can be primarily done outside of a shrinking tile installation season, is good for landowners and tile drainage contractors alike.

“These kind of jobs, they’re not difficult jobs,” he says. “If we can find a practice that we can be working all summer long, and it has the benefits of nitrogen removal – hey, that’s a win-win for everybody.”