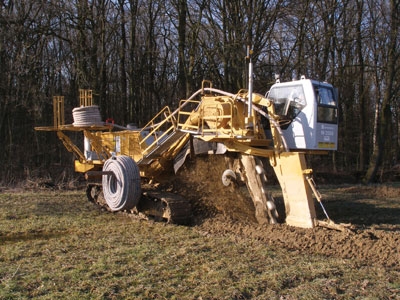 Not content to launch a single major innovation in what has been a landmark year for the company, European manufacturer Mastenbroek has gone a big step further, introducing its new M-3500 – that is ‘M’ for mechanically driven chain – and GPS for chain trenchers.

Drainage trenchers with mechanically driven chains were overtaken, some would say sidelined, by huge advances in hydraulics. But the technology is making a big comeback, largely as a result of Mastenbroek, with nearly five decades’ experience making machines for all types of soil and conditions. The M-3500 brings chain trencher technology bang up to date.

It would be a mistake to view the M-3500 as retrospective technology, in any way. Launched at the triennial Bauma machinery exhibition in Germany early in 2010, the machine was a major star at the show, attracting attention from drainage contractors worldwide. One was German drainage specialist Karl Möhle GmbH, which took delivery of the machine, the latest model to roll off the European manufacturer’s production line, right off the stand.

Early indications from the Möhle machine, and a second, bought by another German contractor, Mors, are that the M-3500 is fast, highly maneuverrable, exceptionally operator-friendly, and sets a new standard in productivity from which contractors working in some of the most difficult terrains in markets around the world could benefit, with its side slope leveling and curved trenching ability. Undercarriage features independent hydrostatic track drive and 650 millimeter- (25.6 inch-) wide pads on oscillating tracks. The machine marks a significant step forward for the drainage contractor, and complements an already impressive lineup from Mastenbroek.

Inside the rise-and-fall operator’s cabin there is an electronic machine display and controls, and a fully proportional joystick that gives the operator total control of the digging mechanism from the seat. The machine also features an independent liftable pipe box, two independent folding pipe reels and machine walkways complying with the latest safety regulations to assist loading pipes.

General manager Christopher Pett says the M-3500 was developed specifically in response to calls for a mechanically driven trenching chain and side slope operation. The German market has traditionally favored such machines and its genre is making a comeback elsewhere in Europe. Since its launch, it has also attracted a great deal of interest in North America, where Mastenbroek sees great potential. “There are some key advantages using mechanical drive, as maximum engine power goes straight to the chain. It’s comparatively more fuel efficient and delivers impressive productivity rates.

Single joystick control means that setting-in is much quicker, which itself can lead to better productivity.”

The M-3500 is the latest machine to be offered by Mastenbroek with Trimble’s Field Level II GPS system. Following extensive European field trials, the launch in early 2010 signified a major step forward in the positional and grade-control accuracy of trenching applications in land drainage. It will be offered to customers as an alternative to current laser surveying and installation equipment. Mastenbroek has a long-standing relationship with Trimble, which pioneered in the drainage industry in the 1970s, taking land drainage to a new level of sophistication.

Mastenbroek, which championed laser systems more than three decades ago, believes GPS is set to make its mark on land drainage with similar impact, bringing as it does the opportunities to reduce waste of valuable natural or recycled resources, and accelerated pipe installation. There are potentially massive savings in backfill.

Trucking companion
Hugely popular in Europe and elsewhere is the Mastenbroek CT/12 crawler truck, an ideal companion to a range of the company’s drainage trenchers, including one of its best sellers, the 30/20. The machine is capable of operating in parallel to, or “tram-lining” in the wake of the trencher. An easily accessible and capacious hopper may be loaded by a variety of plant. Many CT/12s have been sold worldwide. Much more than a gravel cart, the self-propelled CT/12 is a true workhorse of the drainage industry.

Used for backfilling trenches for drainage and other pipeline applications in its standard form, this machine has an engine rated at 164kW (220 horsepower) and weighs in at 17 tonnes (37,400 lbs). The CT/12 has a large 15-tonne (33,000-lb) hopper capacity, independent variable hydrostatic track drive and a 180-degree swing, hydraulically slewable, front-mounted conveyor discharge assembly. Together, the 30/20 and CT/12 are capable of extremely high productivity in agricultural land drainage specification.

Importantly, for contractors that have opted for the CT/12, it extends the season of operation. It is capable of working with drainage trenchers throughout the growing season, not just after harvest. A “moving bed” based at the bottom of the hopper means, additionally, that it is capable of handling a wide range of materials, from sand to coarse aggregates, for trench backfilling. Many contractors can extend their operations outside those of land drainage, using the CT/12, to other utilities works, including pipe-laying, further extending their seasonal operations; the truck is also a tipping hopper and dump truck.

Together the CT/12 and Mastenbroek trencher are an unbeatable combination, according to Dan Sweeting, director of Sweeting Brothers in the North of England. “Dedicated self-propelled plant, operated by an accredited contractor is the farmer’s best choice. The contractor can be on site as soon as a crop is harvested. For example, the farmer can be drilling rapeseed within two weeks of harvesting his winter barley, the drainage having been installed in-between crops,” says Sweeting. “The quality of the trench, and the final installation, are crucial to the success of the finished job. The Mastenbroek ensures a clean and firm trench bottom, laid to laser-level grade accuracy across the whole field. And the machines offer the opportunity to design a scheme to fit the field, not the machine, as is often the case with tractor-mounted devices. All soil types can be accommodated with no compromise on machine stability which can affect three-dimension accuracy of pipe installation.”

His views are echoed by Graham Falkingham, owner of Castle Farm, also in the North of England. “We’re constantly looking at maintaining the quality of the drainage. If there’s a problem, we have to fix it; in the case of potatoes, for example, they must be kept moist, but not flooded. It’s a delicate balance that new drainage methods enable us to achieve. And with laser leveling techniques, installation has improved beyond all measure,” explains Falkingham. “When we buy a new piece of land, we know that it’s probably going to need draining. So we’ve no hesitation at getting the professionals in. It’s a specialist’s job, so we get specialists in to do it.”

Land drainage is enjoying a significant resurgence after a number of years in the doldrums following the withdrawal of grant-aid to carry out the work in the 1980s.

In the UK, where Mastenbroek has its manufacturing base, many respected drainage contractors subscribe to the Land Drainage Contractors Association (LDCA), a trade association that monitors the standards industry-wide. Sweeting continues: “The use of this type of equipment is farmers’ reassurance that the job is done to a high standard. That reassurance is backed up by a host of standards drawn up by the LDCA. It’s not just contractors who sign up to it; manufacturers and suppliers who undertake to comply with recognized standards of workmanship and materials are involved. It means that customers have peace of mind when selecting equipment.”