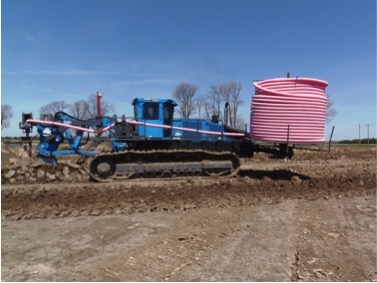 Bluewater Pipe Inc.has recently announced their latest charitable campaign – and this one is a little different.

“The idea for this [cause] came by accident,” says Tony Kime, President of Bluewater Pipe. “We were working on a new product line – red
electrical conduit”, explains Kime, “and our first batch of what was supposed to be bright red pipe, came out a beautiful shade of pink.”

The campaign officially kicked off June 1st and runs until the end of October of this year and many farmers have already pre-ordered be part of the campaign. The goal is to raise $30,000 for breast cancer research, and Bluewater pipe will donate $600 per truckload (50 truckloads) to the campaign.

Kime adds that the promotion is limited to one truckload per farmer and can be initiated by calling 226-425-2111 with promo code – DRAIN PINK. Full campaign details can be found on the Drain Pink Facebook Page at facebook.com/drainpink