While some are experiencing too much water, some don’t have enough. Has drainage water recycling advanced enough to become a game-changer? 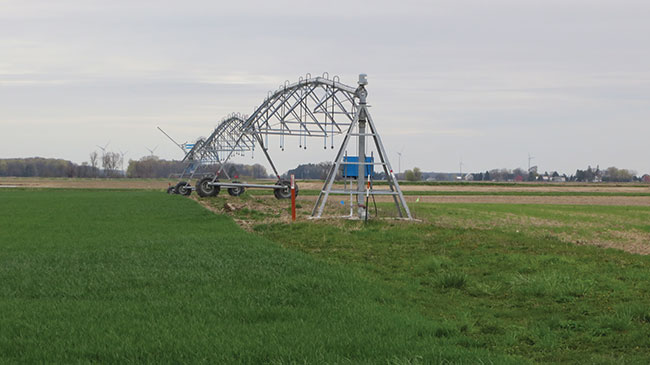 It’s no secret that this past summer was one of the driest on record in many parts of the U.S. and Canada. No one felt the impact of the sustained heat and drought that blanketed much of North America more than the farmers who had to scramble to ensure their fields had enough moisture to sustain crops.

Although irrigation remained an option for some, it wasn’t feasible for others in regions where the traditional water sources that are typically tapped into had literally dried up as a result of extreme heat and lack of precipitation.

Perhaps that’s why talk of applying drainage water recycling as a form of subirrigation on farms has been ramping up among some members of the agricultural community. It doesn’t come as a surprise to Kelly Nelson, research agronomist and professor in the division of plant sciences at the University of Missouri. Nelson has studied the impacts of subsurface drainage in fields for more than 20 years. While the environmental benefits of drainage water recycling have been known for years, Nelson believes extreme weather conditions could prompt some growers to take an even closer look at these systems. “The more extreme conditions you get, the more interest there is going to be,” says Nelson. “It doesn’t surprise me. It’s good to be proactive.”

The advantages of recycling water
In essence, it’s the practice of capturing excess water that’s drained from fields, storing that drained water in a pond or reservoir and then using it to irrigate crops when there is a water deficit.

Nelson says there are two primary benefits to using recycled drainage water for irrigation. First, it takes excess moisture away from the roots of plants and allows them to grow or develop better which in turn can result in increased yields.

“The subsurface drainage component helps remove excess water in a timely fashion. It’s basically lowering the water table in the springtime. You can get better crop establishment and you get good aeration of the soil. The workability of the soil at that time is really important.” The other advantage to using recycled drainage water is that it can promote improved water quality downstream. If drainage water has high nitrate levels, using recycled water means most of those nitrates will remain in the field rather than draining into a nearby river or stream. Nelson says to think of it as a closed-loop system that keeps water on the farm and reutilizes it.

Nelson is part of the Transforming Drainage initiative (transformingdrainage.org), an eight-state project spearheaded by a group of 15 leading agronomists, agricultural engineers, soil scientists, social scientists and geographic information systems (GIS) specialists. The group’s purpose is to transform the way drainage is implemented on farms across the American midwest.

Nelson points out that a recycled water irrigation system may not be suitable in every field. First of all, the field has to be the correct drainage class with the right soil profile that includes an impermeable layer below the surface that limits or slows water movement. Since conditions can vary greatly from field to field, Transforming Drainage developed an online tool to help farmers in the midwest identify if a field might be suitable for subirrigation.

Another factor to consider is the topography of a field. The more slope, the less likely it is to be suitable for subirrigation. 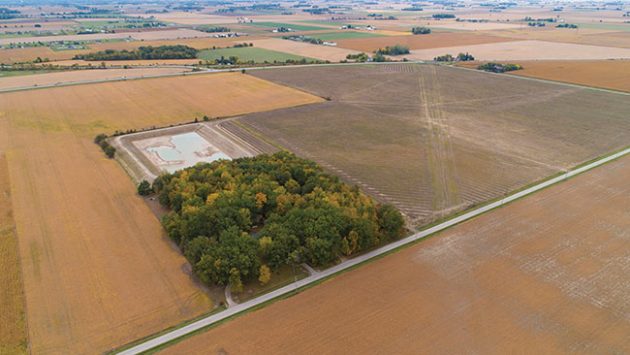 An aerial view
of a drainage water
recycling system.
Photo courtesy of transformingdrainage.org

The Transforming Drainage team has investigated the use of recycled subirrigation drainage on several different crop types including corn and soybeans. The results with corn have been particularly encouraging. In one study, corn yield variability was reduced by 28 percent using a drainage water recycling system.

Farmers aren’t the only ones who could potentially benefit from the increased attention being paid to the use of recycled drainage water. Nelson suggests it could also be a good opportunity for drainage contractors who do regular business with the agricultural community.

“It’s one more tool in their toolbox,” he says.

His advice to contractors is to stress to farm customers that they don’t need to decide on incorporating recycled drainage water into their irrigation system immediately. In most cases, a straight drainage system can be retrofitted down the road to accommodate recycled subirrigation as long as it is designed with drainage water recycling in mind.

“You want to give them the flexibility [to add to it later on]. With GPS systems and being able to document where the tiles or pipes are it’s easy now to go back and add things to it,” he explained.

Incorporating recycled drainage water into a farm’s irrigation plan isn’t cheap. However, Nelson says there are ways of making the cost more manageable.

He suggests designing a new drainage system so it requires fewer connections and making it flexible so that it can be retrofitted at some point in the future if you don’t wish to use recycled drainage water immediately. Farmers may also want to consider staggering the work over several years and targeting fields where the payback is going to be greatest as the top priority.

Another important consideration when it comes to choosing the right drainage system is what size of pipe or tile to incorporate into that system. Three- and four-inch diameter pipes and tiles are the two most commonly used sizes.

The size of pipe used depends largely on the area that is being drained, according to Nelson, and whether or not it will be adequate for the location where it is being installed. The biggest difference between the two sizes, he notes, is the quality of the installation. A four-inch pipe offers a little more “wiggle room” compared to its three-inch counterpart in cases where there are slight changes in elevation. DC