Features Contractor at Work
An eye on the future

Knowledge is power for Morreim Drainage. 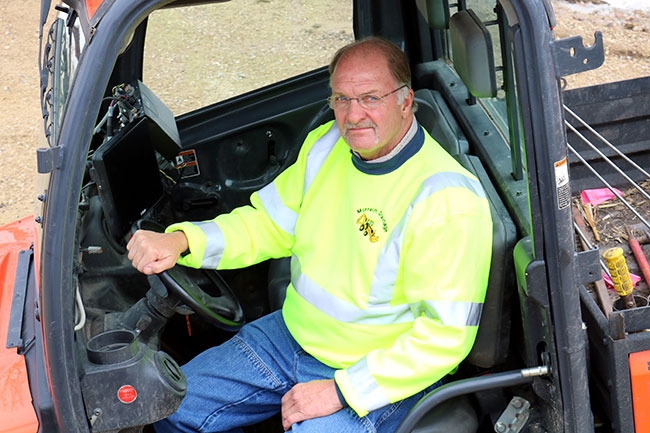 Mark Morreim, president of Morreim Drainage Inc., has always been involved with farming. He was driving tractors by the time he was 12, raised livestock, and eventually started working for a family-owned company that farmed, sold seed corn and had a commercial fertilizer and custom chemical service.

Morreim was the only full-time employee at the father-and-son business and wore a lot of hats: mechanic, operator and salesman – a “do it all” type of employee.

After leaving the chemical application company to help out his dad with his family business in 1990, Morreim ended up moving back and purchasing the home and land in Albert Lea, MN, where Morreim Drainage is based. The location is 15 acres and houses a shop, office, home, several outbuildings and a large area for storing drain tile and equipment. Most of the company’s tile gets delivered to the yard and is transported to a job site by Morriem and his employees. With the ability to store 300,000 feet of maxi rolls, the company also sells tile and fittings out of the yard to customers.

Morreim’s parents, Sharon and Phil, started Morreim Drainage Ltd. in 1969; Sharon was president of the company until she passed away in 2011. Mark is now the president and Phil is the vice-president. Though his father still owns the majority of the company, they will soon start transitioning the business over so Morreim owns it outright. Phil is still actively involved at 82 years young.

“My father has a great deal of knowledge and experience with drainage, having been a former Soil Conservation Service employee. I rely on his help from time to time,” Morreim says.

While farm drainage is the main business, the company also does some on-site septic systems and road boring. With a total of seven employees (including his father and wife, Cheryl, who is the secretary, treasurer, bookkeeper and tax expert), there are usually five employees out on the fields during the busy season. They use a 1965 D9 with a Zor plow for tiling, and after a refurbishment a couple of years ago, Morreim is expecting the machine to run for another four or five years. After operating the plow for close to 23 years, Morreim is now doing the surveying and design work day to day.

While the tile plow may be an older model, Morreim is thinking ahead when it comes to technology and new drainage models. He attends as many seminars and workshops as he can to keep up with the issues facing drainage contractors. Morriem is also trained in controlled drainage and ensures he’s always up to date with new technology. GPS has saved his men a lot of time, especially when it comes to locating old tile.

“I would have to estimate that after we switched over to GPS and once we got used to using it, it probably increased our productivity [by] 30 to 40 percent,” Morreim says. “It made it a lot nicer when you locate tile – you don’t have to go back and find them again because they’re already located with the GPS. [It] saves a lot of repeat work.”

Although there are no plans for the company to use drones, Morreim says this technology has its merits too, especially with the amount of rain Minnesota has seen recently. “With all the rain events we’ve had, we’ve had quite a few ditches that need attention and that would be a really useful tool to be able to analyze what’s going on in our drainage systems and find the problem areas a lot quicker than going out on foot and trying to find them.”

Working with the farmers
Having been a farmer himself, Morreim has seen both sides of the coin, which has helped him operate the family-owned business since the beginning.

Since Morreim typically doesn’t venture far for jobs (he says he sticks within about 30 miles of the shop), he’s used to seeing customers at events or at the hardware store. Customer service is key, Morreim says, and it’s important to be ethical as a small business.

“If you make a mistake or things go wrong, you have to deal with that in a respectful way,” Morreim says. “You can’t just walk away and say, ‘It’s not my problem.’ I think a lot of it is honesty and taking care of your customers.”

Part of taking care of customers is listening to what your customers have to say, Morreim says. However, there are a lot of variations in soil composition and land topography where he is based – part of the “prairie pothole region.” Sometimes farmers want something specific but it’s always up to the drainage contractor to suggest what will work best in a given situation.

“One of the techniques my dad taught me was to meet with the farmer and find out where the problems were at, what the farmer wanted done,” Morreim says. “He would say, ‘Well, this is what I think would work,’ and [if the farmers disagreed] he would say, ‘Well, the reason why I’m doing it this way is because…’ and then list whatever reasons – the terrain, or the way the water runs and slopes.”

Morreim says that a lot of the time, simply explaining the reasons why they’ve chosen a specific plan helps the farmers realize it’s what’s best for their situation.

“I’ve been taught you don’t push people, but sometimes you might have to pull them a little bit.”

In the end, Morreim is happy that tiling a field brings a huge benefit to a farmer’s income and to the workability of the fields.

“I have great pride in watching a healthy crop flourish in a field that we improved with water management skills,” Morreim says. “I have never had a customer regret tiling a field – they nearly always comment they should have done more and done it sooner.”

Conservation efforts
While drainage is imperative to farming and its economic survival in Minnesota, Morreim says it’s up to the contractors and farmers to be proactive in their water resource use. This is why he’s always attending seminars and workshops to keep up on the issues at hand.

Morreim also serves as a volunteer on the Drainage Work Group (DWG), which represents Minnesota Land Improvement Contractors of America (LICA). The DWG was organized in 2006 by the legislature as an advisory group for recommending changes and improvements to Minnesota drainage laws. Other members of the DWG include the United States Department of Agriculture, the Minnesota Pollution Control Agency, as well as various environmental groups, farm groups, legislators and attorneys.

“As a drainage contractor and former farmer, I’m interested in what is involved in the laws that apply to water and water use,” Morreim says. “We need to be on top of it and knowledgeable on it so that if there is a problem, we can try and address it and find a solution for it.”

Perhaps all of this involvement was one of the reasons Morreim was named contractor of the year both in Minnesota as well as nationally in 2016.

Morreim is also a member of the Agriculture Drainage Management Coalition – a multi-state group developing controlled drainage methods for the improvement of water resources. They sponsor training and certification classes to become a technical service provider through the Natural Resources Conservation Service.

“Like they always say, if you don’t get involved and don’t voice your opinion then you’d better not complain about the outcome because if you’re not involved, you can’t be a part of the solution,” Morreim says.

Staying involved with the farmers, the community and what’s going on in the industry allows Morreim to keep on top of the issues at hand and, in turn, educate.

“Being in agriculture is all about trust and relationships. My father taught me honesty and responsibility and it is the only way to succeed in business. We have countless repeat customers that rely on…our experience [with the] issues to help them.”

Related
Modern agriculture – and drainage contractors – need to be the bridge
Seeking out the Top Performers
Editorial: November 2014 – Getting to know you
Farm tiling work stuck in deep freeze