Features Environment
All About Bioreactors

How modifications to bioreactors can help water quality 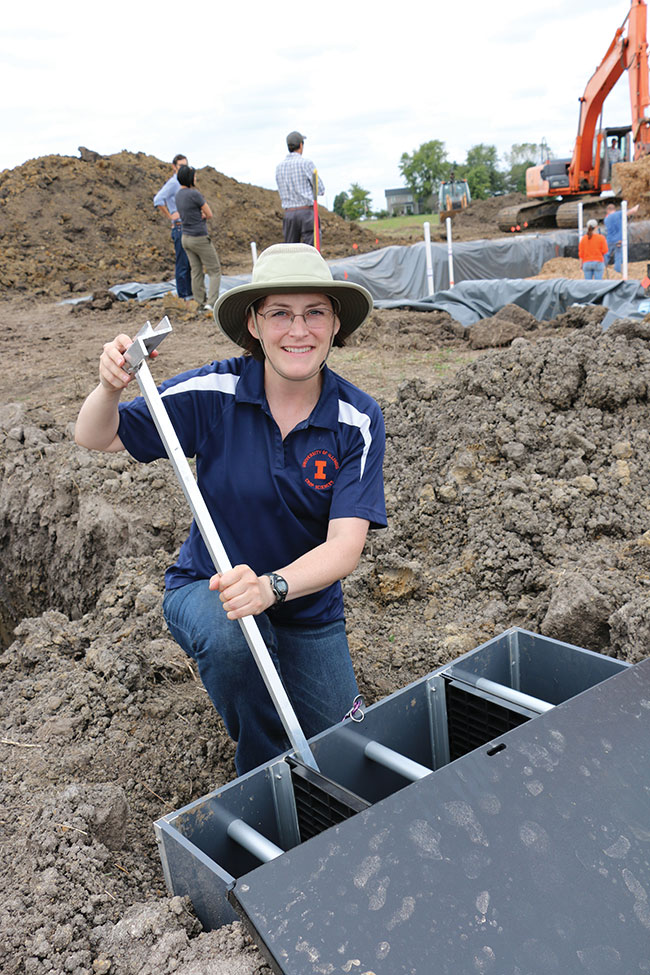 Professor Laura Christianson in the field, working on modifications to denitrifying bioreactors.

A relatively new type of technology, known as a bioreactor, is helping farmers in the Midwest reduce their nitrogen (N) loss up to 62 percent.

Nitrogen is a key nutrient found in fertilizer, manure or compost such as ammonia. It helps grow healthy and bountiful crops, also has environmental implications if it is washed out of the soil.

Through a biological process called nitrification, ammonia is oxidized into nitrate. From there, nitrate follows the nitrogen cycle, and is eventually released as a gas through a process called denitrification. This process is inhibited when nitrate leaches into subsurface drainage. Once nitrate is in water, it causes a process called eutrophication, which leads to algae blooms and other environmental issues.

Surface drainage and reducing N loss is a focal point of a recent study conducted by Laura Christianson and her team at the University of Illinois at Urbana-Champaign. For the past decade, Christianson has studied tile drainage, and she and her team monitor about 15 bioreactors across the state of Illinois.

This study used a denitrifying bioreactor with modifications to determine whether design improvements could treat more water and reduce N loss by an even greater percentage.

What are bioreactors?
Bioreactors are relatively small, edge-of-field devices containing a carbon source (most often wood chips) to create a controlled environment in order to treat and reduce concentrated nitrate-nitrogen that washes out through subsurface drains.

Most bioreactors in this application are between six and 22 feet wide (between two and seven meters) and 50 to 100 feet long (15 to 30 meters), with the excavation depth matching the depth of the subsurface drainage. This size allows bioreactors to be installed without removing any land from production.

“From a research perspective, we want bioreactors to take as much of the drainage water as possible, but also stay small,” says Christianson. For this study, titled Design flow and nitrate removal evaluation of a wide denitrifying bioreactor with baffles, Christianson and her team wanted to see if they could treat more water at the field scale, rather than just modelled on computers.

For the purpose of this study, the team built a wider-than-standard bioreactor, around 35 ft. wide (10.7 metres), and installed two flow-routing baffles. The modified bioreactor was installed in Illinois and was then monitored for three-and-a-half years.

The main objective from this research was to determine if changing the size of the bioreactor and making it wider would have any impact on water treatment and nitrate removal.

How bioreactors contribute to conservation
For those unfamiliar with bioreactors, imagine a subsurface trench filled with wood chips. Water that flows through this trench from tile drains is exposed to the carbon source, which encourages denitrification. Bacteria break down the nitrate, transforming it into nitrogen gas, removing it from the water supply and completing the nitrogen cycle.

In 2015, the Natural Resources Conservation Service (NRCS) approved denitrifying bioreactors as a national conservation practice standard. The efficiency of bioreactors’ annual N load removal has ranged from nine to 62 percent across studies in Iowa, Illinois, Maryland and Canada. Because bioreactors are small and low-tech, they require little or no maintenance to drain effectively and can last up to 20 years. In order for them to aid in improving water quality by reducing N content from subsurface flow, the right environmental conditions must be achieved. Therefore, biochemical engineering is required in the design phase.

There are a number of factors, which can impact how effective a bioreactor is, beginning with the nutrient concentrations (such as pH and dissolved gases) in the bioreactor, as well as external seasonal and temperature changes. For example, in some areas, spring runoff can put a much higher amount of water through the bioreactor than usual, making the bacteria less efficient.

Christianson says the bioreactor’s design and plumbing have to be right for it to work properly. On the upstream side of the bioreactor, there’s an inline water control structure to help route the water correctly in the wood chips. In addition, there is a bypass flow pipe so drainage water doesn’t back up. “We don’t want to be backing drainage water up, tile drainage systems are expensive. We want to make sure that they’re flowing as they’re supposed to flow. With our conservation drainage practices, it’s important to have a bypass flow pipe when there’s a lot of water coming from the field in the tile system,” she says. “The bypass flow pipe is an important part of the design for practices like bioreactors, or even saturated buffers or other conservation drainage practices.”

Bioreactors cost around $10,000 to install, but there are cost-sharing measures available through organizations like the NRCS.

Throughout Iowa and Illinois there are around 80 farmers using bioreactors. Although bioreactors have been around for a decade, they’re still considered a newer practice. Christianson says farmers from around the world are looking to the Midwest to help them figure out how bioreactors can work for their specific situations.

“The nitrogen cycle is kind of doing its thing everywhere and we’re trying to produce food everywhere. In so many locations around the world, we’re at this kind of juxtaposition of trying to grow food, but trying to make sure we’re not getting nitrogen in the water. And so, bioreactors are a great option. I think that farmers around the world are starting to pick up on this idea, which is really exciting. And they’re looking to Iowa and Illinois as farm leaders.” 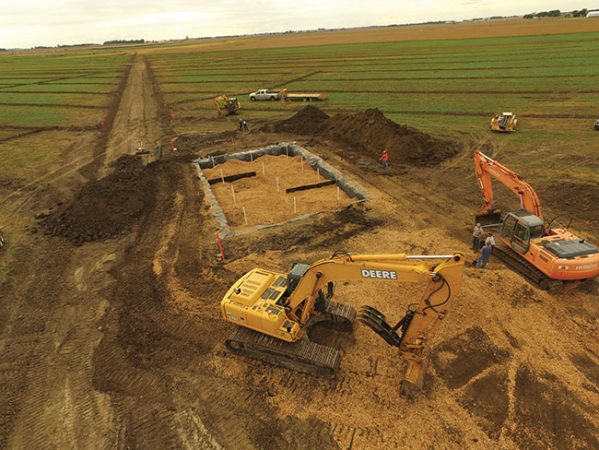 An overhead view of a bioreactor, which typically measure between six and 22 feet wide and 50 to 100 feet long.

Balancing agronomic and environmental goals
Across the Midwest, there are millions of tile-drained acres, which are crucial for agriculture, as is the case in many other regions. And while tile drains are essential to production, they also act as a shortcut to move N into downstream waterways. In order to achieve both crop production and environmental best practices, Christianson says more denitrifying woodchip bioreactors are needed.

“There’s this concept of conservation drainage practices that we promote to meet both agronomic goals of crop production and environmental goals of making sure we keep our water clean, and making sure that we’re good upstream neighbors,” she says. As N travels into waterways, it causes sediment to become more fertile. These additional nutrients turn into algal blooms, which leads to “dead zones” where the water is depleted of oxygen and no organisms or wildlife can live within the zone.

In the U.S., the Gulf of Mexico has the largest dead zone, which returns each summer. The Mississippi River feeds into the Gulf of Mexico and that river serves as the drainage area for more than 40 percent of the continental U.S., including agricultural drainage. This flowing water carries nitrogen and phosphorus runoff into the Gulf. In order to reverse these dead zones, it’s important for N and other soil nutrient loss to be reduced as much as possible.

The United States Environmental Protection Agency set N and phosphorus reduction goals for the states bordering the Mississippi River. As a result, drainage conservation practices are becoming as important as crop production strategies for mitigating dead zones and limiting N runoff into watersheds.

“The states in the Midwest that drain to the Mississippi River basin all have nutrient loss reduction strategies that guide each state’s efforts to meet a 45 percent nitrogen and phosphorus reduction goal,” Christianson says. “That is one goal that each state is trying to meet.”

“It’s a lost opportunity to not also be thinking about water quality, things like bioreactors, saturated buffers, drainage, water recycling and wetlands,” Christianson says. “All of these practices are things that drainage contractors can do.”

While drainage contractors are the obvious choice to install and plumb the bioreactor, farmers need to work with organizations like the NRCS when designing a bioreactor for their specific field.

Results of the study
For three-and-a-half years, Christianson and her team studied their modified bioreactor, measuring the level of N in the subsurface flow before and after it entered the bioreactor.

In the end, the specially-designed bioreactor with the increased width and added baffles treated approximately 40 percent of the annual drainage flow volume, resulting in a 22 to 24 percent N removal at the edge of the field. While this demonstrates the bioreactor was effective, it did not result in more water being treated or an increased N reduction percentage.

“The bioreactor still worked and it still worked on par with what we expect bioreactors to do, so it was kind of a mixed bag. It didn’t work as well as we wanted it to, but it did work very consistently with what we would have expected otherwise,” Christianson says.

Despite this modified design not performing as well as expected, the team continues their research to discover how bioreactors can treat more water.

To effectively sustain agricultural production in the Midwest and around the world, both the growing cycle and environmental impact need to be considered.

“We know tile drainage moves nitrogen from our fields, and we know that nitrogen is going downstream. And so, my personal belief is that our farmers and our drainage contractors are good environmental stewards and know in their hearts that we need to be good upstream neighbors,” she says. “There’s a better way to do agriculture.”