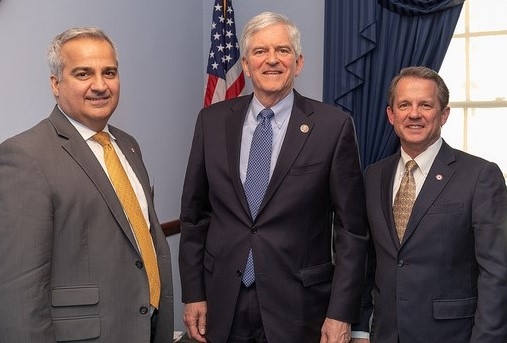 Members of the plastics industry visited Congress to discuss how opening up federally funded infrastructure projects to include thermoplastic pipe can increase the elimination of plastic waste.

With the spotlight on environmental issues, the elimination of plastic waste is a hot topic. Tony Radoszewski, president of the Plastics Pipe Institute, Inc. (PPI), argued plastics recycling and infrastructure improvement go hand-in-hand during his presentation to members of Congress during the 2019 Plastics Industry Fly-In.

“Fair and open competition of qualified products is the gateway to not only reducing costs, but also to increasing the productive use of plastic waste,” Radoszewski explained. “When companies know they have new markets to pursue, in this case plastics pipe manufacturers being including in the bid process, they are comfortable funding new technologies such as how to use more recycled plastic in their products.”

Radoszewski said that there was a positive reception for the group from Congress. In particular, according to Radoszewski, Congressman Daniel Webster (R) from Florida’s 11th District and a member of the House Committee on Transportation and Infrastructure, was pleased to learn that scrap plastic bottles can become long-life plastic pipe used in stormwater management systems.

In addition to Radoszewski, PPI’s director of engineering for its corrugated pipe division, Daniel Currence, was also on the Hill. They met with the legislative staffs of Congressmen Paul Mitchell (R-MI), Troy Balderson (R-OH), Greg Stanton (D-AZ) and Scott Perry (R-PA), who also serve on the Committee with Rep. Webster.

“We are seeking Congressional support for allowing all technically qualified materials to bid on projects where federal funds are used for the infrastructure,” Currence explained. “This would drive down installed costs by opening up the bid specification to include high-density polyethylene (HDPE) and polypropylene (PP) drainage pipe, which are known to stand up to tough environments including heavy traffic loads and high pH levels. These products meet AASHTO H-25 loading requirements and specifications set by ASTM, makes them fully vetted and qualified plus the fact that they have a 100-year service life, documented by independent studies and state and federal government agencies including Departments of Transportation (DOT).”

According to PPI’s Radoszewski, Congress is on the right track to solving two problems all at once. “Finding a way to marry eliminating plastic waste to the infrastructure’s need in an open competition environment was a well-received message during the Fly-In. And, because of Congress’ actions, our members are willing to devote even more research and development resources to the industry and to our country.”

While nothing specific has been set, expanding the uses of drainage pipe is good news for plastics pipe manufacturers. These manufacturers are also actively working on how to use more recycled plastic in their products, allowing for a product that has environmental benefits in addition to infrastructure uses.