Best practices, fueled by data, can improve yield while protecting land and water. 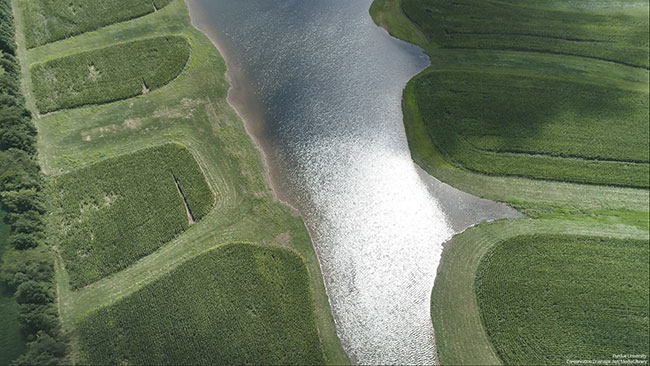 Aerial view of a reservoire and landscape in Missouri. Image courtesy of Purdue University.

Subsurface drainage is a must for many growers who need to remove excess water from their lands in order to ensure suitable crop growth conditions.

In some cases, however, subsurface drainage can lead to serious problems. In the U.S. Midwest, for instance, some drainage practices provide a pathway for nitrogen and phosphorus loss into waterways, which can create environmental problems as far away as the Gulf of Mexico.

A database, published in the journal Scientific Data in July 2022 provides the data needed in order for researchers to examine subsurface drainage practices in order to determine which methods benefit both the grower and the environment.

Nineteen of the sites employed controlled drainage systems that hold water in the field with a water control structure that raises the water level when drainage is not needed. Seven sites employed drainage water recycling systems that store subsurface drainage water nearby in ponds or reservoirs until that water is needed for irrigation, thereby reducing nutrient outflow. Eight sites used saturated buffers to divert some of the drain flow through riparian buffers in order to reduce the amount of nitrate that would end up in surface water.

“For many of us, this the first time we published in this particular journal, which is designed to make major data sets available to the public,” explains Jane Frankenberger, professor of agricultural and biological engineering at Purdue University. “This is a data set that represents research related to three practices that’s taken place in recent decades, all put together in one format.”

Frankenberger says that the data she and her colleagues have compiled can be used by other researchers in order to better understand drainage challenges, and come up with solutions. “Many people don’t have their own data set,” she explains. “So this way, you can download the complete data set, and use it for your own needs.”

Researchers haven’t always made their raw data available in the past, she explains, but in this case, all the data is available to view and download from the National Agricultural Library, as well as from the website: drainagedata.org. “And it’s not completely raw data,” adds Frankenberger. “It has been cleaned up.” Besides the actual data, she says both of the above-mentioned sources have also published maps, a fact sheet on each of the 39 sites, plus a summary of what was learned at each individual site.

Building a useful database
Thanks to this vast database, a number of papers have already been published. Frankenberger says the database is also useful for drainage engineers and managers.

“Let’s say you’re a drainage engineer, you’re new to the Midwest, and you’re used to working somewhere where you weren’t used to having drainage, because it’s quite unique to our area,” explains Frankenberger. “So how would you get the typical values? This data set can give you the numbers you would need in order to do your work.”

One of the researchers who has used the data set effectively is Matthew Helmers, professor of agriculture and biosystems engineering at Iowa State University, and Director of the Iowa Nutrient Research Centre.

“One of the aspects I was most involved with was related to controlled drainage, sometimes called drainage water management, where we manage the outflow with a control structure and plate,” he explains.

The goal was to manage the outflow of the water from the fields during certain times of the year, and to see which approach to drainage water management would prove to be better. “We looked at the water quality,” explains Helmers, “taking into account both the drainage volume (how much water exited the drain), and the nitrate loss that was associated with it.”

Helmers says all the sites he analyzed were managed similarly. “In the spring and in the fall, we would not have any control on the drainage system. It would be like a normal free drainage system,” he explains. “In the summer and winter months, we would manage that outflow, maybe up to within two feet of the ground surface in the summer, and 18 inches or 12 inches of the ground surface during the winter.”

By analyzing the robust data set, Helmers and his team were able to determine that although there were some commonalities across the board at all the sites, some regional differences exist, which means that growers would have to adapt their drainage strategies, depending on their geographic location.

“What we found is that across the whole region, we really did see a reduction in the amount of drain flow when we applied this controlled drainage,” explains Helmers. However, “in parts of Iowa, Minnesota and South Dakota—what we might say is the northwest part of the corn belt—more of our drainage and nitrate loss comes in the spring in the April, May and June period. Whereas if we look at the eastern part of the corn belt—Indiana and Ohio—more of their drainage and nitrate loss comes in the late fall and winter period.”

Wet years vs. dry years
As might be expected Helmers came to the conclusion that controlled drainage is an effective strategy. “We saw a reduction in drain flow and nitrate loss across the whole region,” he adds. “The annual reduction in drain flow was pretty consistent, and an absolute value—how many inches or millimetres of reduction—was pretty similar when we compared a wet, a dry and a normal year.”

Helmers notes that in a wet year, the percent reduction was less, but that the absolute amounts were similar. “In fact,” he says, “we saw about a four-inch, or a little over 100-millimetre reduction in drain flow consistently across the dry, normal and wet years.” He concludes, “We don’t get a disproportionate benefit in a wet year, but we also don’t get a big decrease, at least in the absolute volume of drain-flow reduction or nitrate-loss reduction.” (For more on the mechanics, limitatoins and costs of controlled drainage, see our feature on Page 12).

This was one of the first studies that was able to look at the performance of controlled drainage over such a large geographic region. “Despite maybe not always managing to maximize holding water back, we still saw a pretty substantial reduction in drain flow and nitrate loss across the whole region.”

Surprise findings and best practices
Helmers says that he was surprised to discover that the data set pointed to similar findings across all the locations. “I expected that perhaps we would see greater performance in the eastern part of the corn belt, where more of that drain flow is in the winter,” he says. “I was a little surprised that it performed so similarly across this geographic region.”

While the data and the findings are useful for growers in the parts of North America where artificial subsurface drainage is used, Helmers says that some exceptions should be noted.

“It applies throughout the U.S. corn belt, and probably some part of Canada into Ontario,” Helmers notes. “There’s a lot of applicability in the heavily-tiled drained areas of North America, at least rain-fed tile drainage areas. It probably wouldn’t be as applicable as we get into the west, where maybe they’re using drainage more for salinity control, rather than specifically for the removal of excess water and reduction in waterlogged soils.”

Now that the data has been published, along with conclusions from each of the 39 sites, it will be up to others to analyze the findings and turn them into practica, applicablel advice. “We want to turn this into best practices, answering the questions, ‘What can we take from this?’ But we’re not there yet.”