Growing (and draining) is a different challenge up north 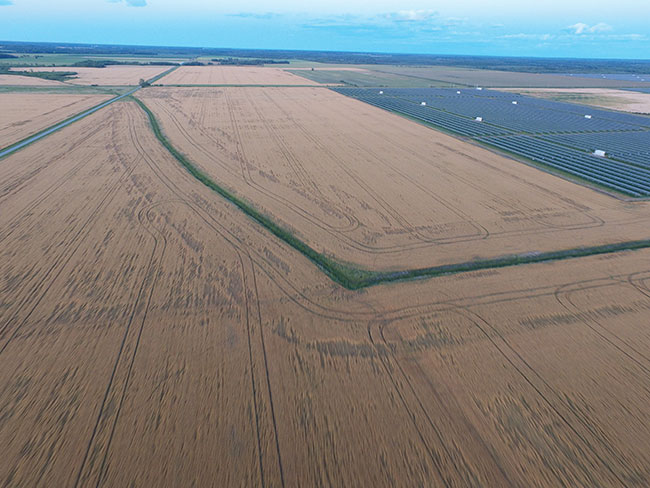 Rainy River, a small Canadian town located close to the Ontario- Minnesota border, is relatively new territory when it comes to grain farming. But economic inventives have brought more farming – and more tiling – to the area. But conditions aren't as straightforward as they are in areas like Sourthern Ontario, Michigan or Iowa. Image courtesy of Jesse Tait.

Ontario is a land of contrasts. When you’re carving grain land from flat scrubland and forest, growing grain and laying tile isn’t exactly a cakewalk, especially compared to the landscape down south.

Grain farmers are still the minority in the Rainy River district of northwestern Ontario,. but these farmers have learned the value of tile. Most of them have have to inevitably tile all of their acres.

Timo Brielmann is one such farmer.

Over the last 10 years, the Brielmanns have transformed their family cattle operation into a 8,800 acre grain farm. Some of this land is owned by a neighbor for whom the Brielmanns do custom work. Some of it is rented under long-term leases with neighbors. Most of the acres, whether owned, rented or custom farmed by the Brielmanns, have been carved directly from the bush.

Transitioning from cattle to grain had been the senior Brielmann’s goal for a long time. “Dad always had a fantasy of having a grain farm,” says Brielmann. In 2012, cattle prices were good, he had just returned from University, and the family saw their opportunity. The family sold their cattle. Soon afterward, they started tiling the neighbors’ operation at their request.

Eventually, with the help of the Northern Ontario Heritage Fund Corporation (NOHFC)’s Regional Tile Drainage Initiative, which conditionally covers up to $500 per acre, they tiled the rest of their acres as well. Just 300 acres of rented land aren’t yet tiled, says Brielmann. More recently contractor Jesse Tait has started putting it in for Brielmann.

Tait, of Tait Brothers Contracting, knows firsthand of the problem-solving opportunity up north. Tait lives in the Rainy River District three seasons of the year. In recent years, his family’s company has expanded from southern Ontario to Thunder Bay, then Algoma and Rainy River Districts.

Tait has enough drainage design challenges to keep him hopping.

Tile is following grain farmers’ expansion into areas traditionally dominated by dairy or cattle operations, or used by no one: marginal land, scrubby or soggy and prone to ponding under heavy rain. According to Tait, Rainy River lives up to its name.

“They have excessive rains in the Rainy River District,” says Tait. “We get rain down south, and I’m only 40, but I’ve seen rain here like I’ve never seen anywhere else. Sometimes they’ll have a half inch of rain every day for a week.

“[But] they can grow really good crops up here, and they’re taking advantage of so many underused acres. You needed tile drainage to get the crops off on time because of the shorter growing season,” he adds.

Landscape challenges
The Brielmann operation is located at the westernmost end of the district, where Ontario meets Manitoba and Minnesota. From their binyard, says Brielmann, you can see into the States.

The land there has a lot of unique features. “When you walk toward the river, the land goes up, so it’s hard to drain into the river. These massive natural ravines take ditchwater to the river,” he says. “We have big, flat fields and they take really big, flat-grade tile. We have sand, too, so filters have to go in. It takes a lot of design and a lot of care. In some areas there’s bedrock too.”

Untiled land in the district gets extremely wet in the spring, and farmers are forced to seed a week or two after their neighbors.

“That’s huge in this area. Say you went to Southern Minnesota – a week or two might not be the biggest deal. A day waiting on corn planting is a bushel an acre [per day down there], but here, if you don’t seed at the right time, it doesn’t work. The winter comes so fast,” says Brielmann. The area typically sees its first frost by the beginning to middle of September; snow starts flying in October.

Tait says the advantages of water management in areas like this are “second to none.”

“You get more bushels per acre. It reduces salinity in soil. It helps dry out the ground and warm it up,” he says, adding that some studies have found a three degree temperature increase in tile drained versus non-tiled ground.

But there are many challenges. One is the proximity to tile suppliers. In Thunder Bay, Algoma and Rainy River districts, tile has to be trucked in quite a distance, says Tait, which means his company sometimes resorts to building its own equipment, including plows.

Design challenges
Perhaps the greater challenge, though, is designing drainage systems that can compensate for Northern Ontario’s unique landscape features.

“When we first came up here, we were going with a lot of minimums for cash crops, and that coefficient is half an inch. We realized that it wasn’t enough,” says Tait.

“We tiled a few thousand acres and then realized we needed three quarters or sometimes an inch in 24 hours, so that made the increase in price for tile very expensive, especially when you have flat grades.” In one field, he put in 30 rolls of 12-inch tile.

Tait Brothers has also gone to closer spacings, he says, to compensate for ponding issues.

“There are some ponding issues. The soil is quite soluble. It’s very different ground,” says Tait. They’ve seen fields with half-acre ponds after heavy rains.

It’s a constant battle, he says, especially with the added problem of compaction, which is fairly common in the area due to wet soils.

Brielmann remembers seeing adjacent canola fields in the area after a heavy rain in 2019: one was tile-drained, the other wasn’t.

There was no ditch between the fields, he says, and you could see a clear line between the two fields – one flooded, the other drained. For the two farmers, he estimates, it was a difference between 10 and 50 bushels per acre.

That year, everyone struggled to get the crop off; at one point the Brielmanns were combining in 15 inches of water. Tile is an investment against this kind of extreme.

There isn’t much time each year to put in tile, either; the Taits are usually battling mud and getting stuck.

“I used to help tile, and the dozer was there because the tiling plow was getting stuck,” Brielmann says. “You’d drag the tractor and tiling cart through the mud.”

The challenges aren’t all related to the landscape and the weather. They’re social, too. For some in the community, it can be shocking to see grain land emerging from landscape that used to be forested, and pipes draining into waterways.

“I think the biggest issues now is the community looks at the trees disappearing and the water going into outlets and there are people that don’t like change and they’re against it,” says Brielmann.

“People stop at the side of the road and yell at you, ‘All you guys do is rip up the trees.’ You just smile and wave at them. They’re upset about the sprayer driving across the field and they think all we do is dump chemicals [on our fields. But] every move is calculated. It’s a business,” he says. “That community perception is the biggest thing.”

Grain farming – and tile drainage – is still new to the area, and represents a learning curve for everyone. Not least, says Tait, the contractors doing the work.

“We’re always learning, we can’t say we know everything,” he says.